So, this week I sketched out three of the ideas I had previously in a bit more detail and decided to drop a couple of ideas/am working on other ideas.

Here are the first responder ones. I like the concept of the first one still, but it isn't clear to the viewer what exactly is going on here. The figures could be anyone with the lack of detail, although I was working in a size about half the paper I would use in the final piece so maybe I'd be able to render them more clearly there. I also don't know if it really matters that the viewer can't tell because I certainly can, and that's probably fine. That being said, I think the second sketch is probably the clearer one to go with. With that one, I would theoretically do the whole thing in the pink/dark blue that I usually do, but maybe use a different color to highlight the details that are unique to these circumstances. 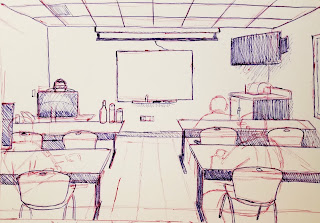 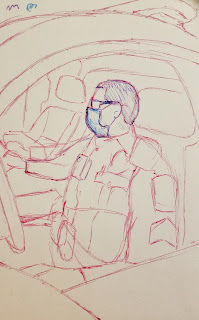 Also, now that I see the papers we will be working on, I decided to flip this vertically to make the scene as big as I am able, making the figures as small as I am able. Again, I don't think I'll be able to show them in the detail I would have liked and the viewer won't quite be able to understand what's going on down there.  I think I might do the entire environment in the pink (with more detail and stronger lines than is shown here) and leave the little guys in the dark blue if I can't come up with a better idea. 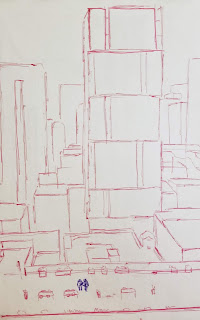 I'm still deciding which of the window drawings to do.

For the fourth drawing, my little sister is considered an essential worker. She's 17 and works at a sub shop. She is super grateful to still be employed, but lately she has been getting actively criticized by customers about hygiene and customer service. Some woman made her take off her gloves several times and wash her hands in front of her the other day. She used some impolite language in the process of doing so. I get the frustration and concern, but my sister is ultimately a child working at a sub shop and is doing the best she can. She isn't there to serve as an outlet for people's frustration. I've heard similar stories from retail workers. Her boss recently bought them all branded bandanas to wear over their faces, so I might do an image of her working the cash register in her gloves/bandana with several people yelling at her over the counter.

I don't have any ideas for the fifth, yet.