This week has been a bit stressful for me, and so I wasn’t able to get as much as I wanted done. However, I think I’ve narrowed down on the concepts I want to work on. It just so happens to work out that my topics for this project align nicely with what I’ve been working on previously this semester. It’s still kind of touching upon insecurities and worries. So, I’ve attached 3 of the 5 pieces I’ll be doing below (just the rough concept sketches of them). 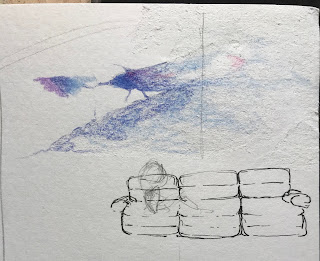 Here, I was playing around with ripping off a layer of sketch paper. I really like the rough texture that it gives. It also gives off this organic ripped edge, which is what I’m going for. Hopefully this ripping technique will work on the actual final paper though. In this piece, as I mentioned in my last blog post, I want to depict a scene where the world keeps going even though all of our times have essentially stopped. For that I was thinking of just inking a person aimlessly sitting in bed while there’s a rip in the room depicting a colorful sky. There’s still a bit for me to work on but those are the backbones for this piece. (The picture below is kind of what I’m going after but not the right color scheme). I’m still thinking about how to fill the space up thought, because it seems a bit empty. 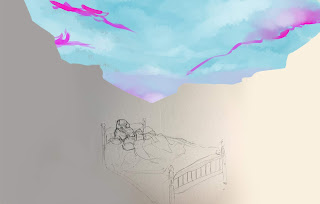 I’m still working on the girl covering herself up. I’ve decided on doing a mirrored piece of the same girl but depicting different scenes. It’s a little difficult to explain so hopefully I’ll have it done soon to just show a picture of it. Unfortunately, a lot of my time was put into drawing this girl. I wasn’t able to really get the drawing right and kept messing up (I’ve posted only one of my mess ups but there were so many). Sometimes, my sketches end up looking better than my final pieces. 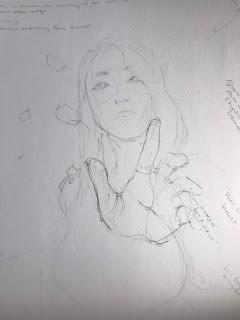 So many failed attempts haha 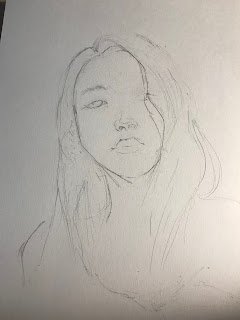 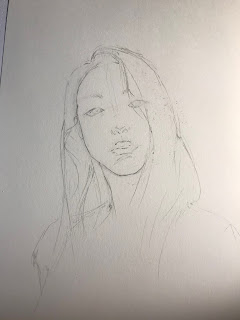 I’m also thinking of drawing cherry blossom petals in each piece somewhere, whether they’re obvious or not. I want to do this because I’ve had a fascination with flowers, but also because cherry blossoms can represent our fleeting time (due to how quickly they come and go).

I’m planning on still doing a technology-based drawing, but I’m thinking of maybe cutting the paper up into smaller rectangles and these smaller pieces will represent different browsers or something similar. It might turn out to be a collage of drawings.