Jenny Saville - The Grotesque and the Traditional

I have always found myself drawn to traditional art: finely tuned portraits of beautiful women free of imperfections. At the same time, however, I have also developed an affinity for the weird and the grotesque, especially in the context of female portrait art. I often feel that such grotesqueness is often lacking from past historical art periods. In my opinion, Jenny Saville's portraits, especially those highlighting the body, are a perfect combination of traditional techniques and more contemporary concepts.

Born in Cambridge, United Kingdom in 1970, Saville quickly gravitated towards painting. Her talents were noticed by her family at a young age, and her parents especially supported her passion for the arts. Her talent for painting along with encouragement from her art historian uncle led her to later attend the Glasgow School of art. 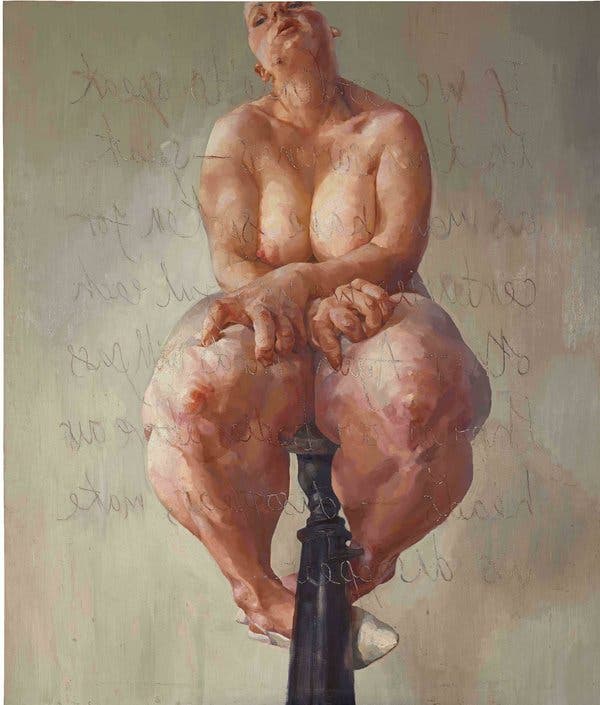 Saville's work can be summed up as "both classical figuration and modern abstraction." Her depictions of the female nude figure, as shown below, are often mixtures of both traditional painting techniques and either grotesqueness or abstraction. Her time in university was specifically defined by her interest in imperfection, along with the ways in which appearance often coincides with societal taboo and what is said to be 'ugly'.

This piece in particular, entitled Propped by Saville is, to me, the combination of beauty and the grotesque. The way in which it's painted, including the strokes, the color scheme, and the way in which the figure sits reminds me of the traditional portraits I love. But, the oversized hands, the disproportional legs, and the writing in the background is characteristic of what contemporary art is: different, new, and now.

In addition to the piece itself being representative of contemporary art, the context in which it was sold characterizes the movement as well. The painting was sold at a Sotheby's auction in Fall 2018 for $12.4 million - a sum which should have made headlines. But, at the same auction was Banksy's self-destructing painting, which was valued at $1.4 million. The so-called "stunt" overpowered the media's coverage of the event, and especially, of Saville's success. The incident as a whole is incredibly ironic, considering that the piece itself is inherently feminist, and a male artist's comparably lower-valued work completely outshone that of a female artist.

I think this is just one example of how the traditional continues to thrive within the contemporary, in ways that are both positive and negative. This occurrence of art made by men overpowering art made by women seems to be a trend that has not necessarily become less prevalent as art has become more contemporary. Another contemporary example is Margaret Keane, whose art was taken credit for from a male companion.

While the survival of traditional aspects of art can be positive, such as the preservation of techniques like those employed by Saville, some traditional aspects can also be negative, such as the fact that female artists are often misrepresented in comparison to their male counterparts. In analyzing contemporary art, I feel that it is important for us to take a step back and take note of whether the survival of such traditional elements is helpful or hurtful.

Posted by Lauren Garbett at 3:15 PM