Art depicting wildlife dates back to the first known artwork by man, those in prehistoric caves. Since then, art depicting animals has come and gone as different styles and themes permeated the art world. Animals were seen in numerous dynasties in the Ancient world, including the Ming dynasty in China, yet began to disappear in the Medieval period as religion began to dominate the art scene. Animals in this time were used as symbols, rather than being displayed in a natural setting. By the time of the Renaissance, wildlife began to become more prevalent in art as people explored the world around them. Hundreds of years later with the development of photography, there was a huge boost in the amount of realistic wildlife that was depicted in art because of its ability to have a still shot of the animal.

Animal depiction in contemporary art has a wide range of styles and approaches. Artists tend to stray away from completely realistic representations of animals, rather trending in the direction that allows the artist to provide much more personal stylistic choice to the piece. Various examples of this are exploring different colors that are not seen in the animal in nature, manipulating the animal such that their body morphs into other objects, or creating an unfinished style to the drawings. These types of works provide much more variety to the wildlife art field and creates an opportunity for more artists to be inspired and take different approaches to the traditional view of drawing wildlife.

Coming into this course I had previously only created realistic drawings and paintings of animals in nature, never exploring contemporary art ideas above. The only real exposure I had to this style was seeing artists do more abstract and loose brush strokes of animals or reinvent the color scheme of animals. Yet after the first few classes hearing about the styles of contemporary art and exploring some artists who specialize in contemporary wildlife art, I decided that I wanted to venture more into this field and push myself to try different approaches to my traditional style. Adonna Khare and Douglas Miller were two artists that I particularly was drawn to after doing some exploring. Many of Khare’s pieces are focused on the juxtaposition of wildlife with other objects or life forms. For example, she created works that display butterflies carrying heavy rocks, merging a bear and a human body into one being, and snails with pears as their shell.

This work inspired me to explore the contrast of humans and wildlife in my art. Miller on the otherhand has work that is seemingly incomplete. He creates portraits with a unique style that is realistic but not traditional, as the subjects often blend into the background or transform into quick lines resembling sketches. 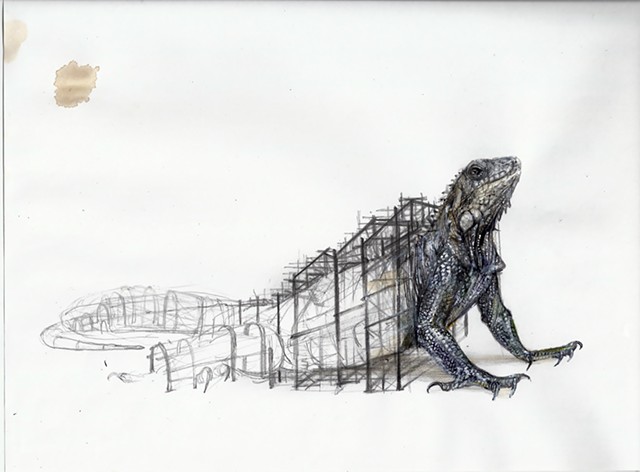 This idea of the incomplete animal is fascinating to me, even though it has not been present in my drawings to this point. Exploring the artwork of these contemporary wildlife artists and others has inspired me to think more broadly about how to create art with a more personal style.

Posted by Charlie Livaudais at 3:24 PM