How do we define contemporary art? Often conflated with “modern” or “post-modern” art, the term “contemporary art” does not reference a definite genre or style of art but rather refers to art which is being created today. Unlike modern art, postmodern art, or any other established style, contemporary art exists only in the present moment. This means, of course, that every popular style or school of art has been “contemporary” at some point during its existence. From the perspective of an on-the-ground viewer, contemporary art is a snapshot of the current climate, but it is also a unifying thread which incorporates each movement and moment which together can contextualize what is observed in the present. Since contemporary art is constantly evolving (literally changing by the day), how do we properly understand new artistic trends that emerge every year? How can we correctly define what we are seeing in the moment when our target is moving, and the only thing predictable about what emerges next is that it will be new? Doing so proves to be very challenging even for the most seasoned art critics and historians, but discussing the themes that seem to be increasingly present across new artists seems like a good place to start.

In his article reflection entitled Contemporary Art Trends 2018, George Greenhill of artvisor.com states that one notable trend of very recent contemporary art is that is especially political. Global political and social contention over the past two or three years have given rise to artists creating art that is more overtly and visibly conscientious. Identity and gender politics in particular have played a growing role in the emergence of new artists, with a growing emphasis on female expression and representation, with events such as the #MeToo movement and centennial anniversaries of women’s suffrage in the US and UK providing opportunity for reflection. In Greenhill’s article, he cites exhibitions such as A Woman’s Place (presented by the National Trust’s Women and Power program) and efforts to increase female artist visibility in London’s Tube system (led by Arts on the Underground). This trend is not exclusively observable in the UK, however; the temporary art exhibition currently occupying space in Duke’s Rubenstein Arts Center features works entirely focused around the female reproductive system and encourages its audience to more thoroughly familiarize itself with the cervix. The installation, entitled (In)visible Organ, even welcomes visitors by asking them to step through a door-sized representation of a vagina, which can be seen below. 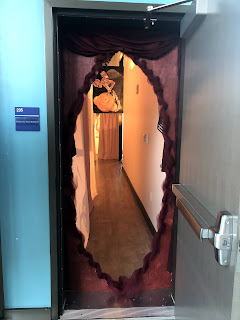 Increased representation of female artists in popular media is also not restrained to visual arts. Women have also enjoyed increased celebration in the music industry, where they have historically been dramatically underrepresented. In their rankings of the 50 best albums of 2018, National Public Radio slotted an album by a female solo act in each of its top 10 spots, with Janelle Monáe’s Dirty Computer placing number one overall. In the wake of appalling stories of abuse by producers, executives, and figureheads in the music industry, the importance of this visibility cannot be overstated.

While women creating popular art that celebrates openness and femininity is far from new, (think Georgia O’Keefe and Frida Kahlo), there is a sense that this art is escaping “otherization” and gaining mainstream acceptance. Whether this growing representation has been spurred by a social climate that has encouraged female artists to be more outspoken, or by critical recognition of the glaring disparities in how female and male-created arts are embraced, it is certainly a marked and defining feature of what should be considered “contemporary art.” And, although the current moment is not without its stylistic marks, many of today’s most successful artists embrace traditional techniques but reinvent the works of their predecessors by creating works featuring diverse and representative subjects. For women, at least, the artistic playing field is being leveled, and that is by far the most important characteristic of the present period.