In October 2018, a piece entitled “Portrait of Edmond Belamy” was sold at Christie’s Auction house for a cool $432,000. With the auctioneer’s gavel, history was made. The artwork, a dynamic and loosely-rendered portrait, was not a painting not created by a famous old master or today’s brightest visionary. Rather, it had been generated through an artificial intelligence algorithm. The sale was the first of its kind, a piece of artwork not generated by a person, but by computer.

The ability to create art seems like a fundamental distinction between man and machine. Artwork, whether representational or abstract, is a subjective interpretation of the world. We imbue it with value because it can illuminate truths, challenge perceptions, and change perspectives. At a minimum, it can strike wonderment of the beauty that other humans can create on paper, transcribe in score, or chisel into marble. But does AI-generated art have this value? When increasingly smart computational models can produce artwork with indistinguishable quality from that created by humans, should the art world open its arms?

AI-generated art generally relies on technology called generative adversarial neural networks. These computational models “learn” both to generate samples which can realistically belong to a distribution—for example, generating an image which could easily belong to a library of real images-- and to distinguish samples that do not belong. They are tuned, trained, through a two-prong learning process: one network is dedicated to generating these realistic samples, while the other is tuned to distinguish fakes from real samples. Iteratively, parameters in the two networks are tuned so that they excel in their competing goals, arriving at a stasis where the generating network can dependably produce realistic images which the discriminating network can no longer dependably identify as fake.

And the results are uncanny. Life-like faces belonging to no real person can be generated, videos of politicians or public figures saying outlandish things can be fabricated, prose seemingly belonging to well-known authors can be spun out. And fake artwork masterpieces could easily replace the canvases adorning museum halls and gallery walls. AI art-generators have been developed to impersonate everything from impressionist to modernist painters. The Google DeepMind algorithm notably depicts its “dreams” in psychedelic abstractions of every day objects, deconstructed and lingering just beyond recognition. 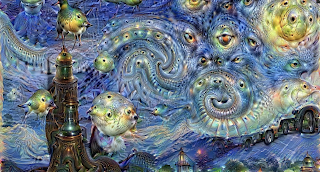 These new advances intrigue and challenge me. The technology is exciting. The complexity encompassed in state of the art models exceeds the limits of computational power just a few years old. AI models are capable of intuiting abstract, high-dimensional features that humans cannot grasp. So invention, creation generated by these models at a minimum is technologically impressive. But while these models create new, yet familiar, artistic images, they do so in a method completely alien and opaque to even computational scientists. AI art generation lacks the human creative process of intuiting, planning, conceiving, and laboring. But when the results can be sold for nearly a million at auction and replace the best Rothko, is this human process actually obsolete?