I have been drawing and creating small scrappy works of art since the age of five when my mother gifted me my first sketchbook.  However, my true passion for creating art emerged when I was in middle school and, while my interest in drawing developed later, I was initially inspired to paint.  As a young artist searching for inspiration, no modern paintings inspired me more than the vibrant and harsh style of Belarussian-Israeli painter Leonid Afremov.

Leonid Afremov was born in Belarus in 1955, and began his studies as an artist at a Vitebsk university in Belarus.  He originally began publishing art in the form of posters.  However, due to the Communist Party’s insistence that the sole form of permissible art was propaganda for the Party, Afremov emigrated to Israel in order to pursue his visions as an artist.  He ultimately relocated his studio to Florida, where he began creating and releasing his signature paintings.

When I first found his paintings on the internet, I, as many of his other viewers, was immediately struck by the vibrance and contrast of the colors he used in his art.  His paintings have no clear central theme or unifying message.  Instead, he focuses on creating visually pleasing landscapes, tranquil park scenes, or paintings of famous landmarks.  Each piece of art has a distinct nostalgic feeling, as the lack of central figures or evidence of human life in his scenes reminds of a time before the modern issues of overpopulation and environmental destruction.

While many viewers might initially think that his art resembles the style of classical or impressionist painters, a closer inspection and insight into his intention shows that his art more closely resembles modern art.  He uses broad, heavy-handed brush strokes not only to create a visually pleasing painting, but also to give insight into his process in creating the piece.  Many renaissance painters tried to create such accurate renditions of landscapes or portraits that they almost hid the fact the art was in fact a painting by blending the colors and the brush strokes.  However, Afremov, armed with only a palette knife, uses both vibrant and striking colors such as oranges, reds, and dark blues, to highlight his own hand in creating the painting by using thick swatches of the paint and applying them to a more blended background.  These swatches primarily mimic the dispersion of light across a colorful scene, and allow the viewer to appreciate not only the beauty of the scene, but the process which the artist went through to create this piece. 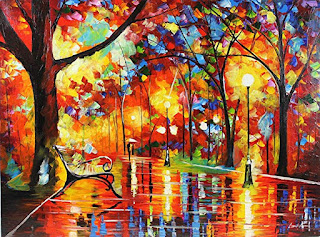 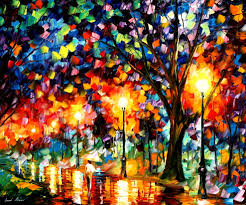 I was immediately drawn to this aspect of creating art, which allows the viewer to appreciate even seemingly simple landscapes or portraits the may not have a distinct message as a work of art that an individual put effort and skill into.  As a young painter and later in drawings as well, I enjoyed the challenge of creating pieces that seemed accurate at the surface, but where either small cross-hatching lines or unblended swatches of paint indicated that the piece was meant to be appreciated as a work of art rather than a photograph.