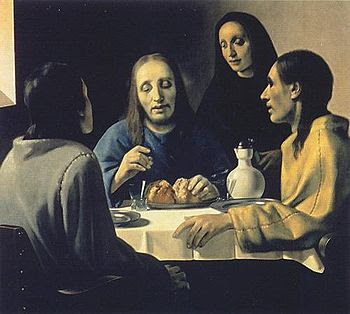 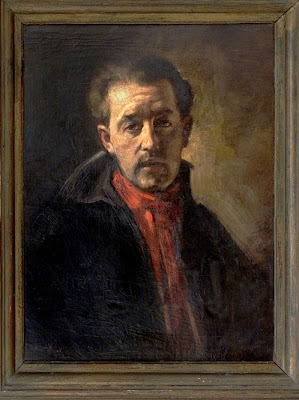 Han van Meegeren is noted as one of history's most notorious art forgers. Born October 10, 1889, to the name Henricus Antonius van Meegeren, he was a Dutch painter and portraitist. In 1907, despite his own dreams, van Meegeren left home to Delft, the hometown of Vermeer, to learn architecture at the Delft Technical College. There he took electives of drawing and painting. Van Meegeren left architecture school in 1913, to focus exclusively on art. He studied at The Hague, where he received a very well regarded award called The Gold Medal - marking the student (every five years) that produced the best work. He became a lavish artist, with jobs all over Europe - and acquired a name for himself as a talented portraitist. Though van Meegeren believed he was a great painter; he was not. Talented though he may have been, the public did not praise his work. His subjects were versatile, he painted biblical scenes, society portraits and nightclub dancers In 1922, he organized an exhibition of his biblical paintings, Christ at Emmaus being one of them. They were not taken by the critics, who were more interested in Cubism and Surrealism, rather than van Meegeren's focus of 17th Century art. After being hailed by the critics for "lacking originality", van Meegeren raged that his genius was not being recognized as what it truly was, and devoted his last twenty years of his life to proving the public wrong.

In 1932, van Meegeren went to the south of France, to work on a painting that would change the art world. It was extremely detailed work. Van Meegeren studied the lives of the artists he would forge, especially Vermeer's. He knew every intimate detail there was to know, down to how much money Vermeer owed his baker. He would practice over and over again the most intimate detail of the left hand of one of Vermeer's subjects. To van Meegeren, forgery was as much an art as creating his own work, and he worked incessantly on creating a piece that would be claimed "The greatest Vermeer ever". He worked with paints, making sure that he could acquire the exact blue Vermeer used. He would put canvases in the oven, attempting the cracked look with age canvases carry. He sketched every day Vermeer's composition and incessantly devoted himself to perfecting the light source from the left hand side of a painting and hitting the still life on the table. Experts have studied his painting “Christ at Emmaus” and decided that it is two paintings fused together. Instead of the still life mixing in with the subjects, the two are completely seperate and do not flow well. It is evident that the still life is completed just as Vermeer would present bread or a pitcher, but that the people lack depth and their proportions are off. Of course, at the height of Emmaus’ fame, no one saw this painting for anything than the beauty it beheld.

The discovery of van Meegeren's paintings as the greatest forgery of the 20th Century gives immense insight into the art world. The recognition of van Meegeren's painting under the name of Vermeer shows us what we regard as a 'beautiful painting' and what cannot be beautiful, because it does not possess the same reputation. Thousands of people came to see Christ at Emmaus and art critics raved that it was the most insightful of all Vermeers. Yet as soon as they found out it had been a fake, they shunned the painting and stressed how obvious it was that it had not depth, structure or 'Vermeer'-like qualities. What changed their opinions? The painting had not changed - it was the same as it had been the first day that the art museum Boymans in Rotterdam had purchased it. But the norm had changed. People think something is beautiful because it has the name Rembrandt, or Klimt or Whistler on it. If we discovered a painting by Da Vinci that was merely a black dot, but if it was definitely a Da Vinci, it would be swarmed by the Louvre and critics would find a way that it was innovative and inspiring. In short, it doesn’t matter what your painting looks like, as long as it has a fancy name on it people are willing to spend a leg and arm for it. van Meegeren made over what is equivalent to half a billion dollars with his forgeries, and I believe he proved his point that people only like things that give you status, and make you seem important if you possess them. Christ at Emmaus still hangs in Rotterdam, but it is a forgotten and often shameful subject for critics.