A love for painting and a love for flowers seems to run throughout my family lines. My grandmother was once an art teacher and artist herself with a particular affinity towards big beautiful flowers. Apparently unbeknown to the both of us, she passed this special admiration onto me. With this is mind, it was only natural that my choice of artist to report on is Georgia O'Keeffe, as her works seem to speak to the matriarchal heritage of artists in my family.

Biography:
O'Keefe was born on November 15, 1887 in Sun Prarie, Wisconsin. She was the second of seven children and was quickly thrust into the world of art, as her abilities were recognized by her teachers at an early age. After graduating high school, O'Keefe was determined to make art her life. She studied in Chicago as well as New York, where she mastered her style of imitative realism. She was introduced to a new style of art from Arthur Wesley Dow. Under his influence, she began to see art an an expression of personal ideas and feelings in which the subject matter "was best realized through harmonious arrangements of line, color, and notan" (Georgia O'Keeffe Museum).

Her work was shown to renowned photographer and impresario, Alfred Stieglitz, in 1916. He immediately saw promise and offered her financial support to paint in his gallery, 291. She moved from Texas to New York and fell in love with Stieglitz. He worked arduously to promote her work and exhibited her paintings at The Anderson Galleries (1923- 1925), The Intimate Gallery (1925-1929), and An American Place (1929-1946). It is during this time taht she acquired most of her fame and prestige.

Since 1929, the scenery of New Mexico had inspired O'Keeffe and three years after Stieglitz's death, in 1949, she relocated permanently. The landscape became a huge source of inspiration for O'Keeffe and her landscape paintings New Mexico became as famous as her work in New York. In 1986, at the age of 98, O'Keeffe passed away.

Her Work:
In the early years between 1915 and 1918, O'Keeffe experimented with abstraction. She used abstraction in an expressive manner, which made her stand apart from her American counterparts. By the end of this period, she was using water colors as her primary medium to express her enthusiam for the landscapes which inspired her. 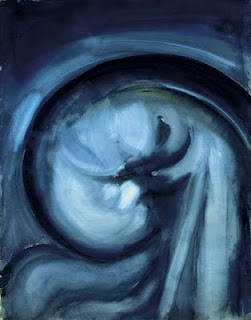 This early piece of O'Keeffe's represents her expressive abstraction and use of color. The image is ambiguous, yet highly evocative. What it is exactly that inspired her is unclear from the painting itself, but the flow of lines and contrast in values is very expressive. 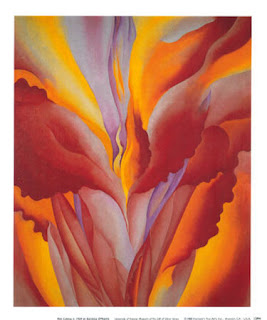 This piece of art represents O'Keeffe's philosophy on nature and flowers, in particular. She believed that flowers are so small that many miss their beautiful details. As a result, she decided to draw them large. This image is clearly abstract in nature, but again is evocative beyond its deceivingly simplistic appearance. O'Keeffe focuses on the inside of the red canna, looking beyond what easily meets the eye. Again, her lines are very fluid and reflect the beauty of nature. She doesn't use a wide range of colors, which gives the painting a very warm tonal feeling. 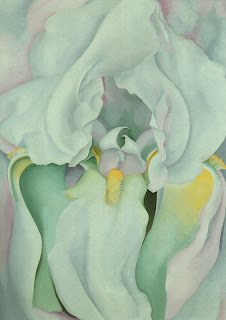 Light Iris, 1924
Light Iris is another example of O'Keeffe's interest in a close interpretation of flowers. As opposed to Red Canna, O'Keeffe uses cool tones to evoke a different sense from this painting. Again, the style is abstract and impressionistic in that the purpose of the image is not pure factual representation. The close up perspective of the flower allows for one to see a flower in an unnatural perspective and pay close attention to finite detail. The yellow accents add a aesthetically pleasing aspect to the blue-green tones that dominate the image. Again, the painting is very fluid and the flower seems seamlessly perfect. 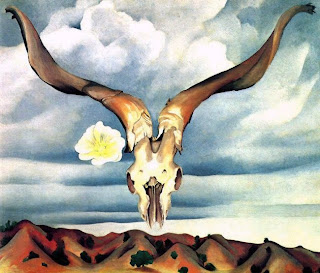 This picture demonstrates O'Keeffe's inspiration from New Mexico. Painted in 1935, Ram's Head, White Hollyhock, Little Hills was painted in the later part of O'Keeffe's career which ended in New Mexico. At this point, she focused on aspects of nature beyond flowers. She had a particular attraction to the vast landscapes of New Mexico, as represented in this image. This picture is impressionistic, with the floating ram's head skull. Interestingly enough, O'Keeffe manages to insert a floating flower into even the most stark of landscapes.