In light of our final two projects, I thought I'd post something about large structural objects in unexpected spaces. For our drawings, we're just appropriating images and sketching them in as if there actually was say, a hippopotamus standing in the middle of the main quad. But what if there actually was some random object there? Like... the giant clothespin sculpture in Philly.
Enter Claes Oldenburg, Swedish sculptor extraordinaire. Oldenburg studied at Yale and the School of the Art Institute of Chicago; and is famous for the enormous sculptures he constructs in collaboration with his [now deceased] wife, Coosje van Bruggen. Their pieces depict everyday objects enlarged to monumental proportions and then placed within public areas. Such additions to parks and city centers were at first ridiculed, but their playful peculiarity is now beloved.
Take Typewriter Eraser, Scale X for example, housed at the National Gallery's outdoor sculpture garden. Standing 273.25 x 152.5 x 136 inches and weighing in at 10000 pounds, this painted stainless steel and fiberglass construction is no small matter. It's red wheel and blue strands are whimsical, and the idea of a typewriter eraser taking on such an important presence begs some thought into why its now obsolete form stands deified in monolithic statuary in the sculpture garden in the capital of the free world. 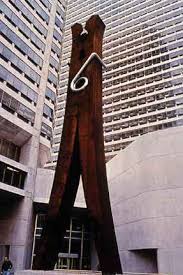 The Typewriter Eraser is not a sole case; Oldenburg's work appears around the globe. The aforementioned Clothespin graces the plaza outside Philadelphia's City Hall. At 45 feet high and ten tons, it too is too big to go unnoticed. Why is a clothespin sitting in the middle of City Square? 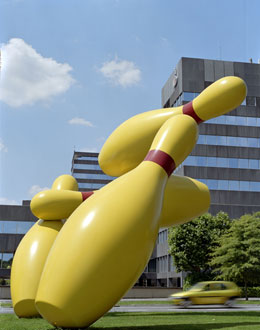 Why are there flying bowling pins at the intersection of two avenues in the Netherlands? 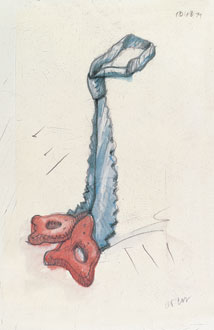 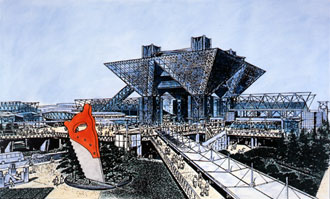 A saw slicing through the ground at the Tokyo Exhibition Center?
Why not? According to Oldenburg, such work "reflects both the surroundings and their context but through [his and his late wife's] imagination and selective perception." Through carefully planned sketches of the sculptures and their placement, as depicted above for the saw piece, his fantasies become physical realities. Take this spirit into the final project and do with it what you may.
- Rebecca Kuzemchak
http://www.nga.gov/fcgi-bin/tinfo_f?object=107762
http://en.wikipedia.org/wiki/Claes_Oldenburg
http://www.oldenburgvanbruggen.com/
Posted by Rebecca Kuzemchak at 7:07 AM