Kenneth Noland was born and raised in Ashville, North Carolina. Ever since birth in 1924, Noland was exposed to art as his mother was a piano player and his father was a semi-impressionist artist. His parents were very supportive of their four children’s artistic interests, including Noland’s. After graduation from high school which was during World War II, he joined the Air Force which was influenced by his father’s career as an amateur pilot. After his service within the air force, in 1946, Noland began his schooling at Black Mountain College, being taught by Ilya Bolotowsky and Josef Albers who both had significant impacts on Noland’s art. Noland expressed influences from Albers in his works which demonstrated the attitude of art as problem solving, the direct handling of materials, the use of geometry, and the emphasis of color. He showed juxtapositions of distinctly, different colors as well as holding a symmetrical and concentric design constant. He also expressed his judgments of color not theoretically, but in ways of intuitive feeling for relationships. Although Albers demonstrates a great influence on Noland through his works, Noland claimed that Bolotowsky had a larger impact on his development and considered him as a mentor figure. Noland liked Bolotowsky’s openness in working with abstract art in various ways. His working with these two teachers resulted in his art education beginning with nonobjective art; the study of the fundamentals of art as line, form, and color which is envisioned of abstractly.
As Noland developed his art form more, he began to use cubism in a more expressive manner. He shifted from his hardedge and smoothly finished geometrical works to a more physical and spontaneous type of art emphasized by artworks done by Paul Klee and the School of Paris, that he attended, which came to have major influences on Noland. He eventually began to unite two art types which were the ideal and the physical, with the geometric and the painterly. He expresses a physical sense of space with meaningful brushwork, staining, overlapping edges and the illusion of diminishing forms created by concentric bands of color. He also incorporated irregular edges, diagonals, curves and sphere, either combined or alone. Noland was always about symmetry and the center. He worked a lot on mansonite and used a thick build up of paint within his works. At times, he would use a palette knife to apply the paint and also would occasionally scratch into the paint to obtain a graffitolike effect.
Around 1953-54, Noland began to experiment with plastic-based paints within in his works, rather than oil-based paints. He began to use Magna, which is a paint that is compatible with oil but has acrylic-resin as a binding means. He considered his works with Magna as “one shot” paintings because it was very difficult to re-work a color due to the paints nature. His works during this time period reflects his continued experimentation.
Noland’s first important works are considered his concentric circles. He then moved on to create his cat’s eye pictures in which his concentric circles are replaced by an ellipsoid or oval which also contained smaller ovals or circles. In these types of paintings, Noland painted the entire canvas. Around 1963, Noland began to work on his chevron series in which he used v-shaped bands of color that fanned out symmetrically from a central vertical axis. This was a distinct shift from his curved edges with circles to the straight edges of the chevron. His chevrons were of more incisive shape and intense color compared to his circles. Noland also began to play with diamond shapes and horizontal stripes within his works. By 1970, Noland started to shape very eccentric canvases. These were extremely complex and reflected a high control over color.
I picked to explore Kenneth Noland’s work because I admired his bold works of art. At first they seem very simple and not involved, but I soon came to realize that they had very powerful emotions involved. I liked particularly his choices and uses of color in all of his works. I also liked that he had certain particular core patterns that he choose to depict in several of his pieces.


One of Noland’s first pieces. He felt that he best conveyed his color sensibility with the circle shown by Beginnings. It is both a specific as well as a general form. 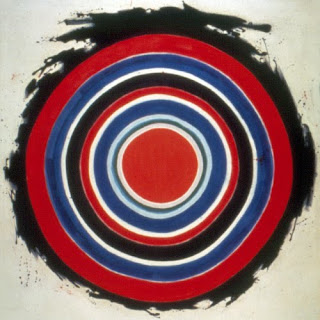 Bend Sinister is an example of one of his works involving the chevron. His use of color is very distinct depicting straight edges. 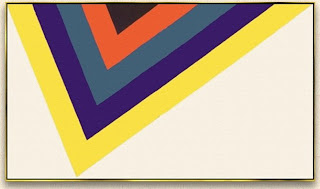 Stria is one of Noland’s stripe works of art. He uses pairs of wide color bands that are interrupted by narrow different color bands. 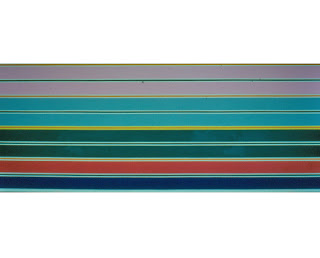