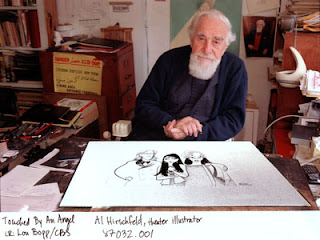 Al Hirschfeld was a very well known caricaturist. He was born in 1903 in St. Louis, Missouri. As a teenager, he grew up with his family in New York City where he studied art. Hirschfeld was able to accomplish many things at such a young age. At the age of 17, he was an art director at Selznick Pictures. After Selznick went out of business, Hirschfeld traveled to Paris, where he continued to study painting, drawing, and sculpture. When he returned to New York he was set on pursuing a career as a painter but one of his sketches of an actor led his work to be published in the NY Herald Tribune, Times, and other New York newspapers. This began his series of theatrical drawings. Hirschfeld became known for his very unique style in his caricatures. Most of his drawings were very linear, done in black ink on white paper. They were simple and thus much more “cleaner” than other cartoonists’ drawings. Hirschfeld attempted to use the minimum number of lines in his drawings. 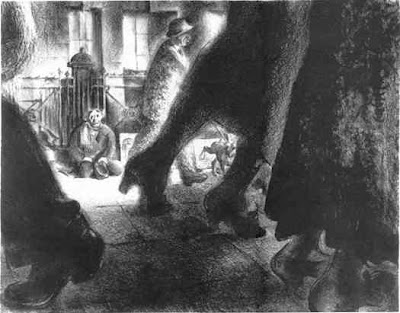 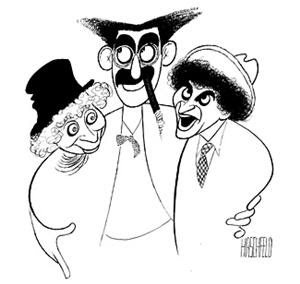 The Marx Brothers
As Hirschfeld’s career developed, he became famous for his illustrations of Broadway plays. His illustrations were meant to effectively portray the play in order to show people before opening night. He also began illustrating the casts of the plays to include in reviews in The New York Times. He also continued to drawing politicians, TV stars, and celebrities. This brought Hirschfeld fame and recognition as most people felt honored to be illustrated by him. It is during this time when Hirschfeld returned to using the medium of lithography in his work, as is seen in his illustration “Lindy Hop”. 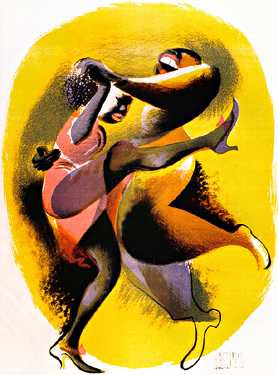 Lindy Hop
During the Forties, Hirschfeld also began incorporating another unique style into his art. After his daughter Nina was born in 1945, he began drawing her name in the background of his drawings and even included them in strands of hair, sleeves, and folds. This further added to Hirschfeld’s style and attention to lines. To the public, this became known as the “NINA Game” and Hirschfeld even began including a number next to his signature to tell people how many NINA’s were in the drawing.

Later on Hirschfeld also collaborated with S.J. Perelman on projects, including Westward Ha!,and Around the World in 80 Clichés. In 1991, Hirschfeld was commissioned to draw postage stamps commemorating famous American comedians by the US Postal Service. This once again brought recognition to Hirschfeld’s work. His work continues to be displayed in the Metropolitan Museum of Art and the Museum of Modern Art. On January 20, 2003, Al Hirschfeld died of natural causes.

I chose Al Hirschfeld because from the start his work attracted me. Looking at his caricatures, his use of lines drew me in. Most of his drawings lacked lines that made them very unique. Hirschfeld seemed very dedicated to his work and study or art because he used the money he made from his work to fund many trips to study art. His motivation to advance in his work and for his personal knowledge inspired me. I also enjoyed his incorporation of a game in his art pieces for his audience. It was evident that Hirschfeld enjoyed pleasing and entertaining his audience. 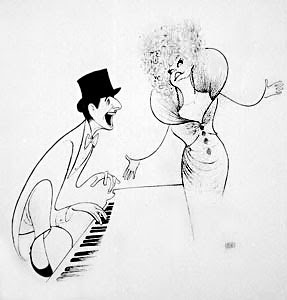 KT and Mark Nadler
I've also included a link to a youtube clip of Hirschfeld completing a drawing from start to finish. His techniques are very interesting to watch so I recommend you watch it: