This semester I enrolled in a South African History course and have studied the political and social implications of the system of apartheid, or institutionalized racial discrimination, of the South African government before 1994. Although the apartheid system was not formally instated until 1948, Sekoto must have experienced the immense cruelty of racial hatred throughout his early life in South Africa. Because art often serves as social commentary and can reflect the underlying tensions within a society or nation, I hoped to gain further insight into South Africa, a nation plagued by racism and oppression during the artist’s lifetime, by examining Sekoto’s paintings. I find that the artist’s work is a profound manifestation of art’s ability to illustrate the consciousness of an oppressed group of people.

Born on September 9, 1913 in Botshabelo, a mission station in the Transvaal of South Africa, Gerard Sekoto became known as the father of South African art (SAHO). Although he studied to become a schoolteacher, teaching at Khaiso Secondary School from 1934 to 1938, Sekoto became interested in drawing and painting. After winning second place at a national art competition at the University of Fort Hare, Sekoto moved to Johannesburg where he built a strong reputation painting landscapes and everyday scenes of black life (SAHO). In 1940, one of Sekoto’s works became the first painting by a black artist to be purchased by the Johannesburg Art Gallery (World Wide Arts Resources).

Unhappy with his working conditions in Johannesburg, Sekoto traveled to Cape Town, where he became extremely productive and developed a unique personal style. After spending two years in the Transvaal, during which time he became more dissatisfied with his working conditions and began to truly sense the oppression of the oppressive South African government, he left for Paris, where he dabbled in both the music and art scene of the city. Sekoto became emotionally and culturally reconnected with his homeland of South Africa when he visited Senegal in 1966 (SAHO). However, as a result of new restrictions under the apartheid regime, the South African government revoked the artist’s passport during that year. Throughout his career, Sekoto painted primarily South African subjects; however, he used European styles such as impressionism, cubism, and orphism to convey social realism in his urban black art (World Wide Arts Resources). Sekoto’s works convey the social tensions of black culture in South Africa and became increasingly political throughout the artist’s life.

Gerard Sekoto died in Paris in 1993 and in 1995, researcher and correspondent Barbara Lindop published a book about Sekoto’s life and works, including numerous newly discovered songs he had written throughout his life. 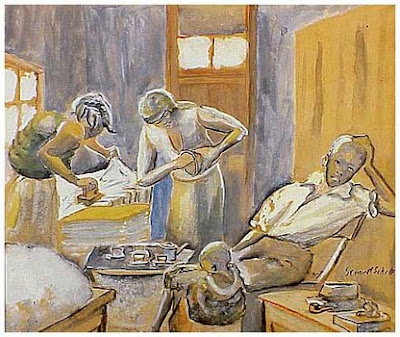 Interior Sophiatown, painted in 1939, is a relatively nonpolitical work from Sekoto’s early career. The colors and postures of the figures indicate warmth and tranquilty. During the 1940’s and early 1950’s Sophiatown became a center of black art, politics, and culture; however, in 1955, the ruling South African National Party passed the Group Areas Act which ordered for the removal of the black residents of Sophiatown for the purpose of building a white suburban neighborhood in its place. Interior Sophiatown represents the peaceful nature of life in this township before it was bulldozed to the ground years later. 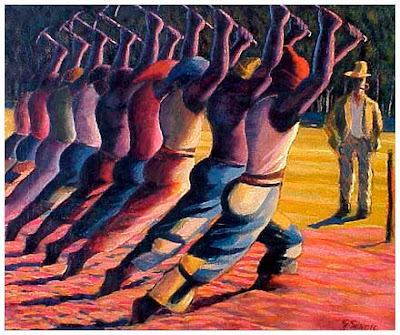 The Song of the Pick, which Sekoto completed in 1947, displays far more heat and tension, serving as a far more political commentary on black life in South Africa. A depiction of black workers under the supervision of a white overseer, this painting depicts the racial tension of South Africa in this period. Raising their pickaxes in unison, the black workers seem to form a phalanx against their white supervisor. Although ostensibly an illustration of black workers on the job, these men seem united in defiance and poised on the brink of attack, and, since their faces are obscured from view, it is difficult to tell whether they are looking down or facing their oppressor. This painting represents a decisive moment and possibly Sekoto’s prediction of a future revolt. 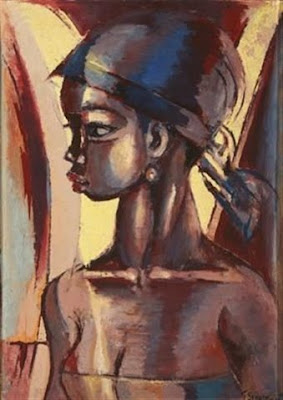 Image from artnet.com
One of Sekoto’s later paintings, Girl with a Turban is ostensibly a nonpolitical illustration of a black female completed in 1978. However, her rosy lips, smooth skin, and delicate features demonstrate an idealization of black men and women consistent with the views of the Black Consciousness Movement, which had reached a climax during these years following the death of the movement’s leader, Steve Biko in 1977. This movement maintained that “black is beautiful” and encouraged black South Africans to be proud of their ethnicity.