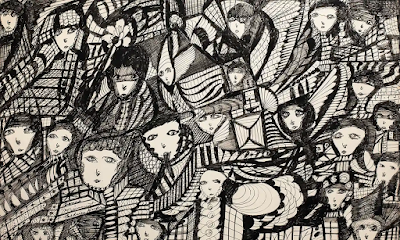 “Outsider Art” is a term that originated in the 1970s, with an impact on contemporary art that has intensified over time. This term has changed definitions throughout the past, expanding to cover a larger and larger range of artwork, beginning with pieces created by psychiatric patients. It originated with several doctors who, upon seeing the dozens of unexpected art pieces created by their psychiatric patients, collected the works and published them. This exposure of unanticipated art created in isolated circumstances inspired a French artist in 1948, Jean Dubuffet, who dubbed this type of art “art brut”. Translated into English, “raw art” means artwork that had not been influenced by art society or mainstream culture--art in its raw form. Shown is a piece by Madge Gill, an artist who contributed to the early ‘art brut’ movement. 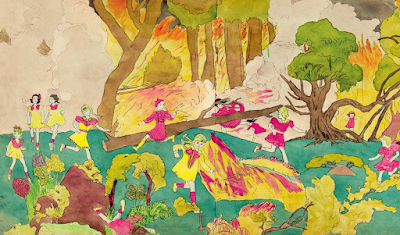 The amount of Outsider Art produced has increased in volume as more and more people decide to pick up art as a hobby, disregarding a lack of formal art education and the conventional guidelines of fine art. Public opinion has changed to encourage those with any interest in art to pursue it. A quick trip to the nearby art store or a googling of art techniques is convenient enough to pique the interests of people who did not originally consider themselves artists. The lines between “outsider” and “insider” art begin to blur, as the Outsider Art Fairs in New York and Paris grow in popularity, and other galleries offer spaces to “outsider” artists. With an open mind and the resources now available, the art world has become more hospitable to those without a formal art education or without a desire to follow convention, because of their desire to still create art nonetheless.


“Outsider Art” was coined by art critic Roger Cardinal in 1972, as a direct English translation of “art brut”. However, this definition quickly spun out from its original context. Today, Outsider Art includes any work by artists who do not have a formal art education, or do not take part in the established art world. This includes self-taught artists, hobbyists, and folk artists. One of these “outsider” artists is Henry Darger, who worked as a hospital janitor during the day, and in his free time, created a massive 15,145 page long epic novel called In the Realms of the Unreal, which was only discovered after his death.

Grimes, Shaunta. “On the Inside Looking Out: The Fascinating World of Outsider Art.” Medium,
Medium, 31 Jan. 2019,
medium.com/@shauntagrimes/on-the-inside-looking-out-the-fascinating-world-of-outside
r-art-789d36ff5bae.