Body Art In a Contemporary Landscape

Body art is the contemporary art form of decorating or changing the human body with ephemeral paintings, permanent tattoos, scarification, branding, implants, shaping. These forms of body modification often completed as as part of a cultural tradition, an appreciation for art, a method of beautification, or a study of the structure and limits of the human body.

Body art has roots dating back to the prehistoric era. Dr. Enid Schildkrout, who curated the American Museum of Natural History's exhibition “Body Art: Marks of Identity,” has placed the significance of body art in history as “a way of signalizing an individual’s place in society, marking a special moment, celebrating a transition in life or simply following a fashion.” In the earliest cultures, humans had always been changing and molding the body through tattooing, painting, mutilation as part of cultural rites of passage. Moving into the 16th century, women of Europe began body modifications using corsets for beautification. Use of corsets have waxed and waned, but is historically an extremely well-known form of body art.

It wasn't until around the 1950s that body art experienced a resurgence linked with the cultural and societal expectations surrounding one's roles and responsibilities in the modern era. Increasingly, body art has had roles in performance art, where an artist uses the human body to convey their message. Common messages have included dissatisfaction with hyper-consumerism, exploration into technological or virtual bodies, or testing limits of stressors on the body including extreme body mutilation. 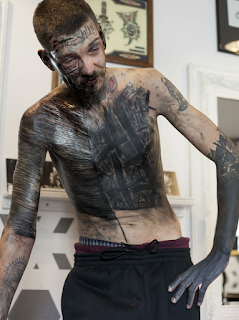 One notable form of body art that has caught my interest and shock is the Brutal Black tattoo project, which, as Fareed Kaviani puts it, "prioritizing pain over aesthetic". Whereas a tattoo session involves mitigating a person's pain, a Brutal Black tattoo session does not accommodate for respite from the pain of getting tattooed, and instead instructs the recipient to embrace the pain of being tattooed as quickly and brutally as an avenue for "ritual and rebirth" through tattooing. As one of the artists Phillip 3Kreuze states, "In this project, there's no compassion, no scruples, no sense of empathy."

This form of modern art reminds a lot of the historical information I have read regarding body mutilation. Brutal Black calls back to a time when body art was valued for its pain rather than for its beautification in the way it tested human limits and allowed the recipient to experience a form of euphoria. To me, body art is representative of how one artistic movement can often have such disparate components, much in the way that art can so starkly juxtapose an appreciation of beauty and a ritual of pain.