Njideka Akunyili and “Afropolitanism”
The work of Nigerian born artist, Njideka Akunyili captured my attention as I scrolled through images of contemporary artwork. Not only because her colorful and textured pieces made my eyes travel throughout the entirety of the pieces, but also the culturally charged messages portrayed by her works as well as their titles left me thinking long after I had scrolled on to the next image. Her artwork belongs to a contemporary trend of “Afropolitanism” and explores identity and nationalism of African immigrants as they move out of their cultures into other cities and urban environments across the world.

Akunyili’s works are most often large mural style pieces made up of a variety of media. She uses colored pencil, charcoal, and fabric as well as newspaper cutouts, text, and photographs to create a collage styled piece. She uses detailed patters and contrasting bright and dark colors to entice the observers eye throughout the entirety of the piece. The majority of the pieces are set in the intimacy of an apartment living room or kitchen with furniture and picture frames filled with African individuals in tradition clothing or in familial groups.

What catches my eye most often in her works is not the individual or individuals that are the focal point in her pieces, but the faces of individuals collaged into the wall paper, the clothing, the floor tiles; and even more clearly, the individuals within the picture frames or television screens who’s faces are clearly visible and often looking directly outward. Often objects or clothing have similar patters as the background causing them to blend into the background and drawing more attention to the faces which are constantly peering from the background. The longer I spend looking at the piece, the more the faces appear.

What I like most about her pieces is the scale of the work, the African patterns and textures, and the unexpectedness of the messages and themes of the pieces. One of these themes has reoccurred throughout many of Akynyili’s pieces. It is the situation of a black woman in an intimate position or gaze with a white man either alone or in a small group setting. One piece in particular, Akunyili’s “I Still Face You”, appears to show some sort of familial setting with four African individuals in traditional African clothing gathered around a small dining room table closely looking at a young white man who is also seated at the table. This man is dressed in very western attire looking up at a black woman in a western styled dress. To me, this image encompasses the intersection of western and African culture as it seems to show an African woman introducing her white significant other to her family. The wall paper and the floor contain a collage of images seem to represent a deep cultural history and expansive African ancestry.  There is no hostility emitted by the various sides in the piece, but there is a sense of seriousness of the image representing the tension of cultural mixing. 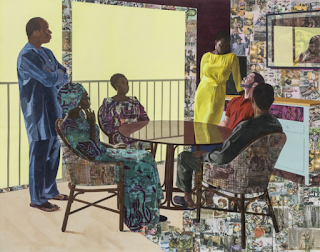