“After years of painting faeries, I’m often asked if I ‘believe’ in them. The best answer I can give is that I don’t have much of a choice in whether I believe in them or not, for they seem to insist on my painting them." — Brian Froud

Brian Froud is a British illustrator and graphic designer. Since the 1970’s, he has illustrated multiple children’s books and published dozens of art books. He’s also worked on various films, including The Dark Crystal and Labyrinth, as a concept artist. The common thread in these diverse media? Fairies.

Influenced by turn-of-the-century children’s books illustrators Arthur Rackham and Edmund Dulac, Froud is known internationally for his illustrations of the fair folk. But whereas traditionally, depictions of fairies looked like scantily clad women – often gliding and occasionally faintly glowing or with butterfly wings, as pictured below – Froud has moved verily into the realm of the inhuman. 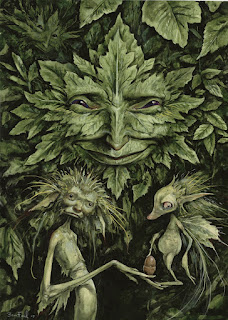 Froud portrays fairies in a way that is as varied as the hills: wrinkly, leafy, twig-like, towering and miniscule. Some of them have beaked faces or spiny backs. More than a few have long, impossibly thin limbs attached to frogs feet or bony hands. Paging through his book, I could find fairies peeking out from toadstool caps and peering out of tree trunks. Yet every pixie, dryad, and troll maintains the same distinctive style.

It’s beautiful artwork, full of detail but with clearly defined focal points. Froud has mastered the dim lighting of the forest floor, as well as the soft ethereal glow of angels and cave worms. His primary mediums appear to be graphite and water color.

Even though it’s inhuman, it’s not unbelievable. Froud clearly has a solid grasp of human anatomy, and often exaggerates, stretches, and compresses anatomical features and human body language in a way that is still recognizable, if strange. The result can be charming, especially on all the fairies with wide cheek bones and a twinkle in their crinkled, fathomless black eyes. 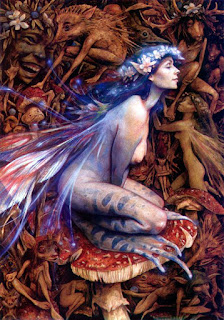 Through a subdued, earthy color palette and organic textures, the artwork has a very natural feel to it – and that’s part of what makes it so epic. Looking at Froud’s illustrations, one can imagine the very rocks, trees, and rivers that inspired the original folk lore, long before the advent of Christianity and apparently, long after. Here, finally, one can make out the mischievous and outright dangerous beings who might lure travelers to their deaths or steal babies from cradles.

The last century has been good to fantasy art. With the creation of the film industry, and the increase in reading for pleasure, genre fantasy and speculative fiction developed, and with it, the entire field of Concept Art/Visual Development. In this context, numerous contemporary artists have radically changed the face of fantasy with less human-centric visions, though Brian Froud can still be given some credit for bringing olde-style faeries back into the popular imagination. Traces of his reimagination of the fair folk can be seen in the popular movie/book series The Spiderwick Chronicles, Holly Black’s The Good Neighbors, and Disney’s live action Maleficent, among other strange and wondrous fantasies.

Posted by Juniper Night at 3:25 PM