Flipping through my sketchbook, one thing becomes abundantly clear. Either forty different people took turns drawing in it, or I still have no idea what I’m doing. Don't worry- . As fascinating as the former would be, I am both humbled and proud to say the latter is true. Let me explain

Growing up, I was not the artist of the family. For as long as I can remember, my older sister was always “talented”, “gifted”, and even “exceptional” in drawing. While adults looked on in awe as she filled notebooks with endless cartoons of her classmates, dreams, and stories, I enjoyed dressing up and watching Andrew Lloyd Weber’s Cats for the thirty second time in a row. As we grew older, it became apparent that singing Mungojerrie and Rumpleteaser was of less importance to the adults around me than producing hard evidence of progress, so I tried ardently to follow in my sister’s footsteps. This is to say that rather than attempting my own personal style, I tried to copy her every move; a situation that neither of us enjoyed very much. Thus I never developed a concrete style and stopped drawing all together.

This mentality has stuck with me throughout this year during drawing 199. I don’t have a style, but I do my best to reproduce something in my assignments. While my drawings share a similar type of mark making, these are completely unintentional because they are my honest efforts to create something resembling realism. Let me be clear- I have never understood photo realistic drawing. If one were to copy out Hamlet word for word, we would all think them crazy but admire the effort. For me, it is much the same with realistic drawing. I can appreciate the skill, but fail to understand the point of reproducing something that already exists. This of course is somewhat ironic considering that for the most part of my childhood, this is exactly what I attempted to do.

However, in my sketchbook, none of these rules applied. Not only could I draw whatever I wanted, but I could do so in whatever manner I pleased. And, given the opportunity, of course I wanted to try everything. Realism, various cartoons, anime style, manga style, surrealism, complete abstraction in pen, pencil, marker, even eyeliner. The plasticity rather than the hodge-podge end-result was and continues to be what draws me to the art of drawing.

In particular, my rebellion against the curriculum and rules of realism has been realized in the number of portraits (if you can call some of them that) in the book. Not given the assigned opportunity to attempt portraiture, almost every single drawing is a singular or series of floating detached portraits based solely upon whatever I could come up with. I would be lying if I said I didn’t enjoy my little artistic power trip.

As the year progressed, however, I found myself using actual reference material as well. In particular, I enjoyed sketching either those around me (avoiding at all costs prolonged, awkward staring) or strangers “selfies” on social media. The idea of photographing and editing portraits of one’s self as to project a specific, self-determined image of the self to the world is somewhat fascinating to me. It is also something I have never felt comfortable doing, so I thank all of the kind strangers who #selfie’d bravely and in doing so, provided some lovely reference material. 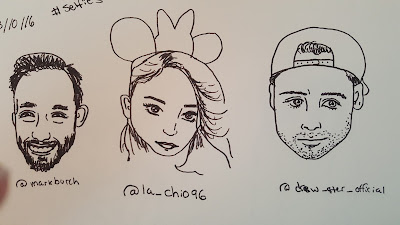 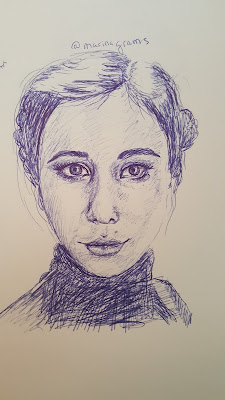 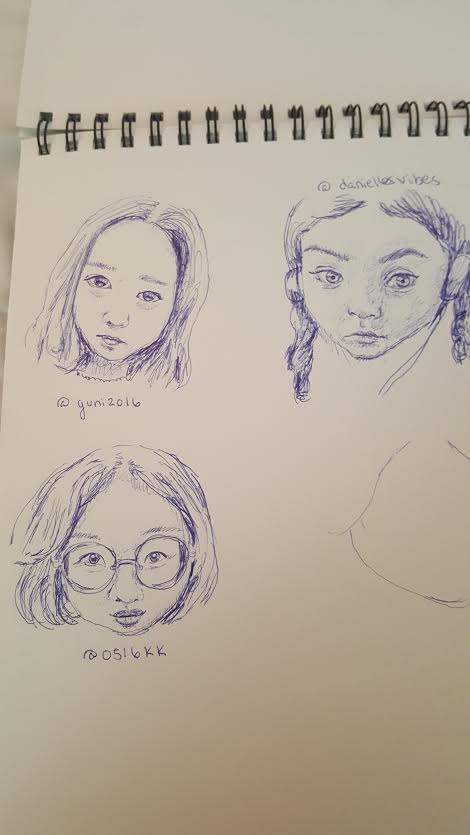 Although I don’t need to justify my skills or lack thereof in drawing, I do so in remembering this: there are very few things of originality that I can contribute to the world, but the only one who can produce the things I draw is me. There is something (perhaps something grandiose and pompous, but something nonetheless) satisfying about allowing one’s self the illusion of individualism and originality. At the very least, I take comfort in the fact that no one can make the exact same mistakes as I can. The imperfection and dissatisfaction that I have with my sketches are what makes them mine, makes them original, and, in my eyes, makes them of any worth.

As I already mentioned, at the end of this semester, I still am happy to admit I don’t know what I’m doing- and that’s a good thing. If someone were to sit me down and ask me to draw an elephant “in my style”, I would be able to do little more than give them a blank stare and an awkward silence. While in my younger years I would have been ashamed of this, I now wear my ignorance as a badge of pride. Thank goodness I haven’t settled into one style or another, and thank goodness I haven’t perfected anything. This means that I can be ever in the search of experimenting, making mistakes, and creating things that are truly and honestly made by me. Any other way, it would be boring, wouldn’t it?