I had never received formal art education before, and being a self-motivated artist I clearly knew my limitations in drawing: I thought I was a little lost, I did art purely for fun and wasn't always widely aware of what I was doing with my art. When I started this class, I expected a relief from the confused state of artmaking. I thought we were to be guided step by step and do whatever the teacher told us to--a brand new experience in my life! But I was surprised when it became clear that the class's purpose was not on perfecting your skills but on finding your voice, focusing on the artist's mind rather than the artist's hand.

It was actually a pleasant surprise. In my stage of creativity, I already understood the importance of the expression of the mind in artmaking, all kinds of arts, but I needed time and space to practice this technique of transforming the thought into paper. So, I realized that the class's goal totally coincided with mine.

With excitement and high energy I passed this flying semester. I found out my capacity of that transforming technique through tons of practice. I remember at the beginning of the semester, I had a few sketches, but nearly all of which drawn from beautifully pre-composed photographs. My mystical stairwell with a mirror was the only piece in which I played around a little bit: I added a mirror and some water. All others--my mom's portrait on the beach, the creepy abandoned amusement park, and the forest with a father and a son--were adapted from photographs. I did not compose those scenes, or altered any element purposefully. When I discussed with Prof. Fick, he showed a strong interest in the stairwell piece (which later becomes, "Untitled"). It was also my favorite, because somehow it had some part of my mind put inside the scene.

Gradually, through more works, I began to find it irresistible to try out my ideas on the paper. I veered toward surreal imagination, occasionally using photographs for tools to be arranged according to my idea, not as sources of inspiration. I continued my signature features. For instance, water represented inspiration and spirituality in multiple works, and I tend to play with my W.Y.O signature a lot, hiding it, altering it to suit the situation. One signature feature that stood out throughout my drawings, is what I call "the absence of the protagonist." It is my tendency to exclude any recognizable-sized human figure in my drawing. It is not to say that I dislike drawing people; I draw people, too, as shown in my detailed portrait of my mom. But I want a more intimate experience with the viewer. With a big human standing in a drawing, it often implies that you are gazing at someone else's life or circumstance, but with the absence of the protagonist, my drawing invites you--the live protagonist--in. I strived to create a silent conversation between my thought and its viewer in every single work.

After getting used to drawing what I find fascinating--mysteries, natures, infinities, and philosophies--I began to feel my hand freer than ever before. I could extract images purely from my mind and I could execute it with my hand. That's when I embarked on a longer journey. It wasn't until some point this semester that I felt all my past adventures had been doodling around the bay, but once I find drawing an expression of interesting thoughts, I'm preparing to set out for the open sea. As if by nature, I unconsciously put myself in face of bigger challenges every time. The final piece I did for this class is one of the most ambitious ones I've ever done. I underestimated its complexity and ended up tangling in a time-consuming, energy-consuming, complicated and rich piece. But my patience  pays off. My final drawing, after multiple times of burning the midnight oil and endless hours of hard work, turned out to be exactly what I wanted to express. Although if given unlimited time, my perfectionist drive could finalize it further.

Everything I did in the semester is the best standard I am able to hold to. Taking this class is the best decision I made in college. Although some works came at great cost, I don't care. This may sound very silly, but as long as I'm a young and energetic artist, I'll keep up this level of inspiration and I'll remember what I want in every future artwork--to present interesting things, to create conversations. 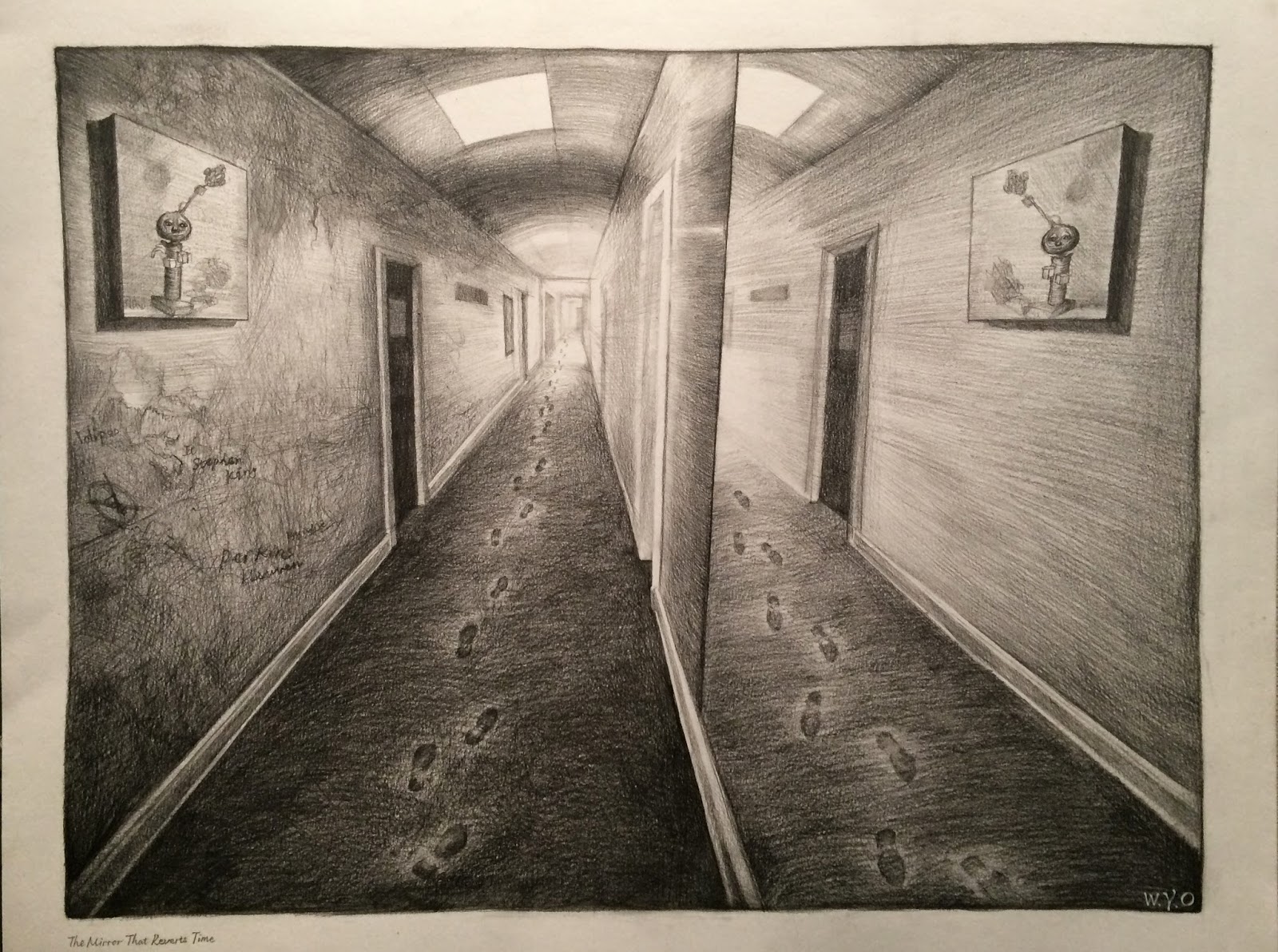 The Mirror That Reverts Time 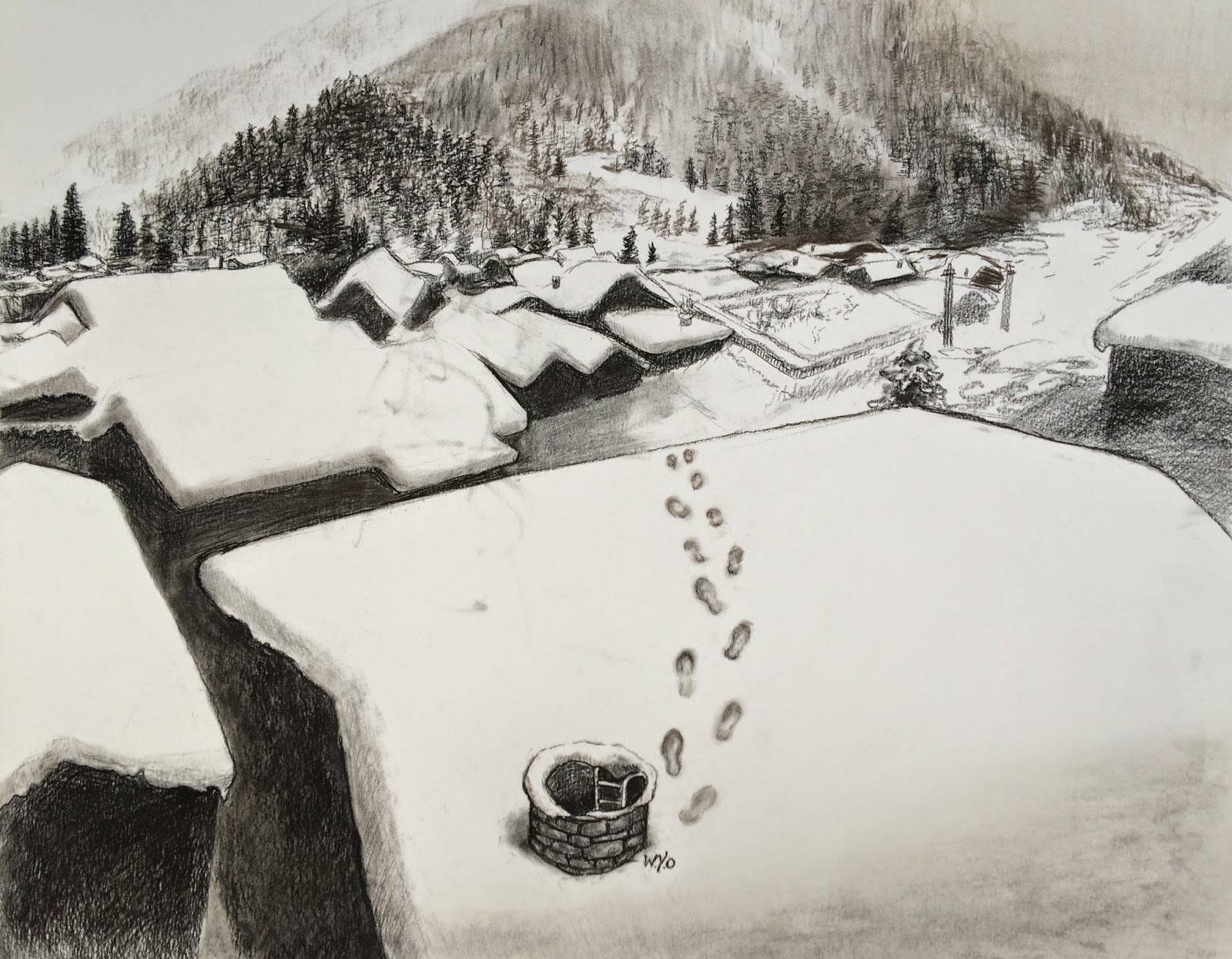 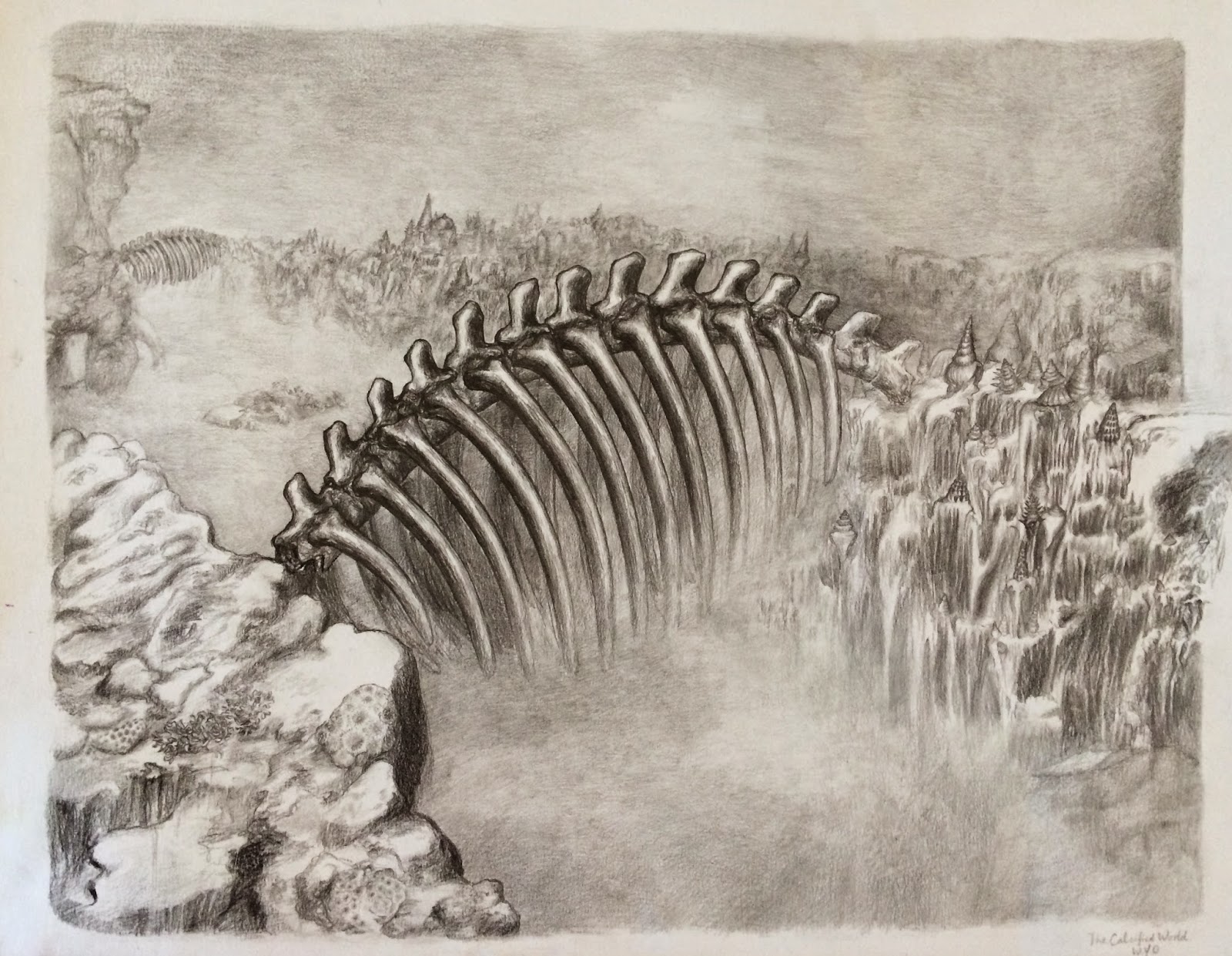 Infinity of the Self 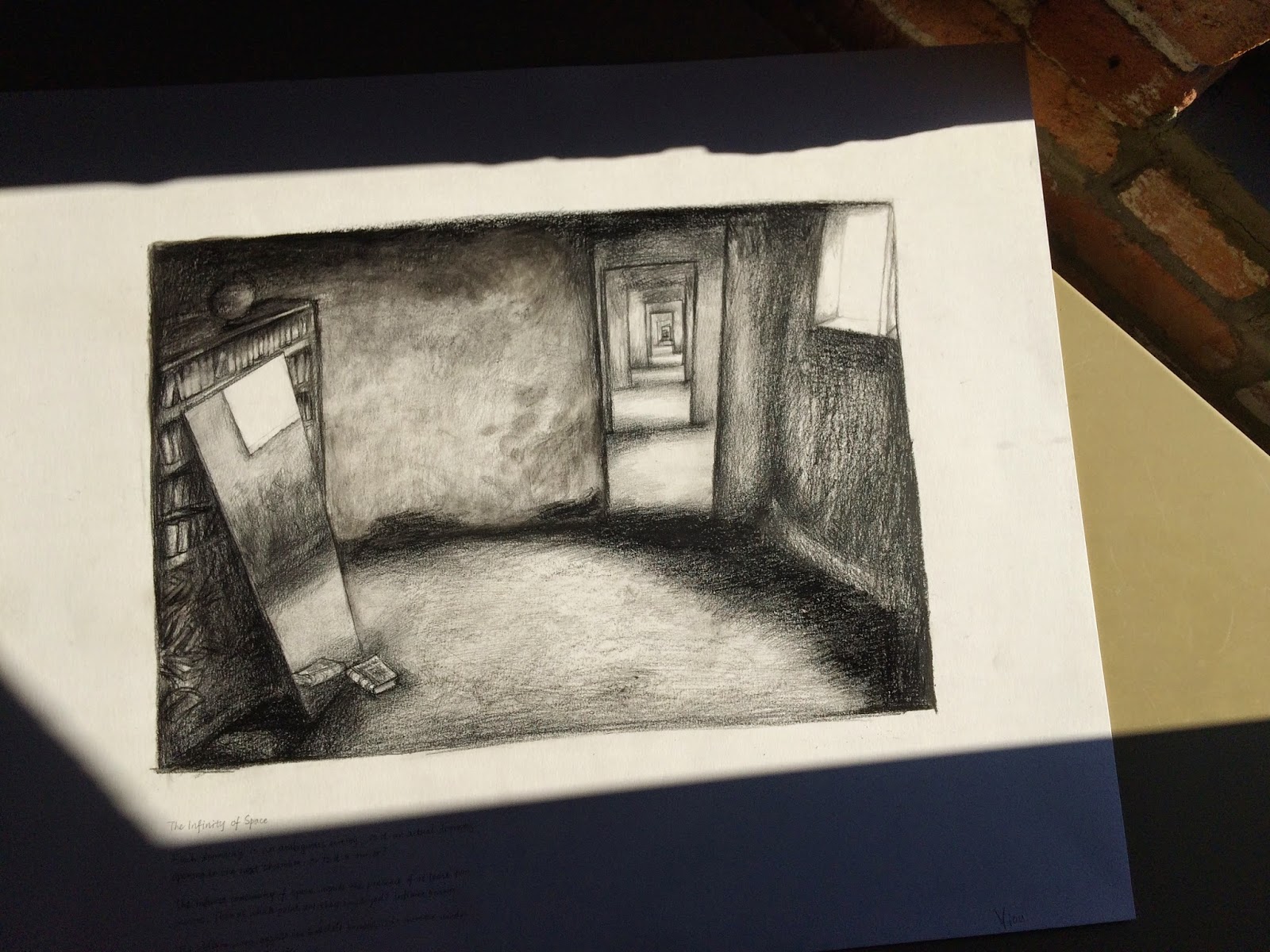 Infinity of the Space 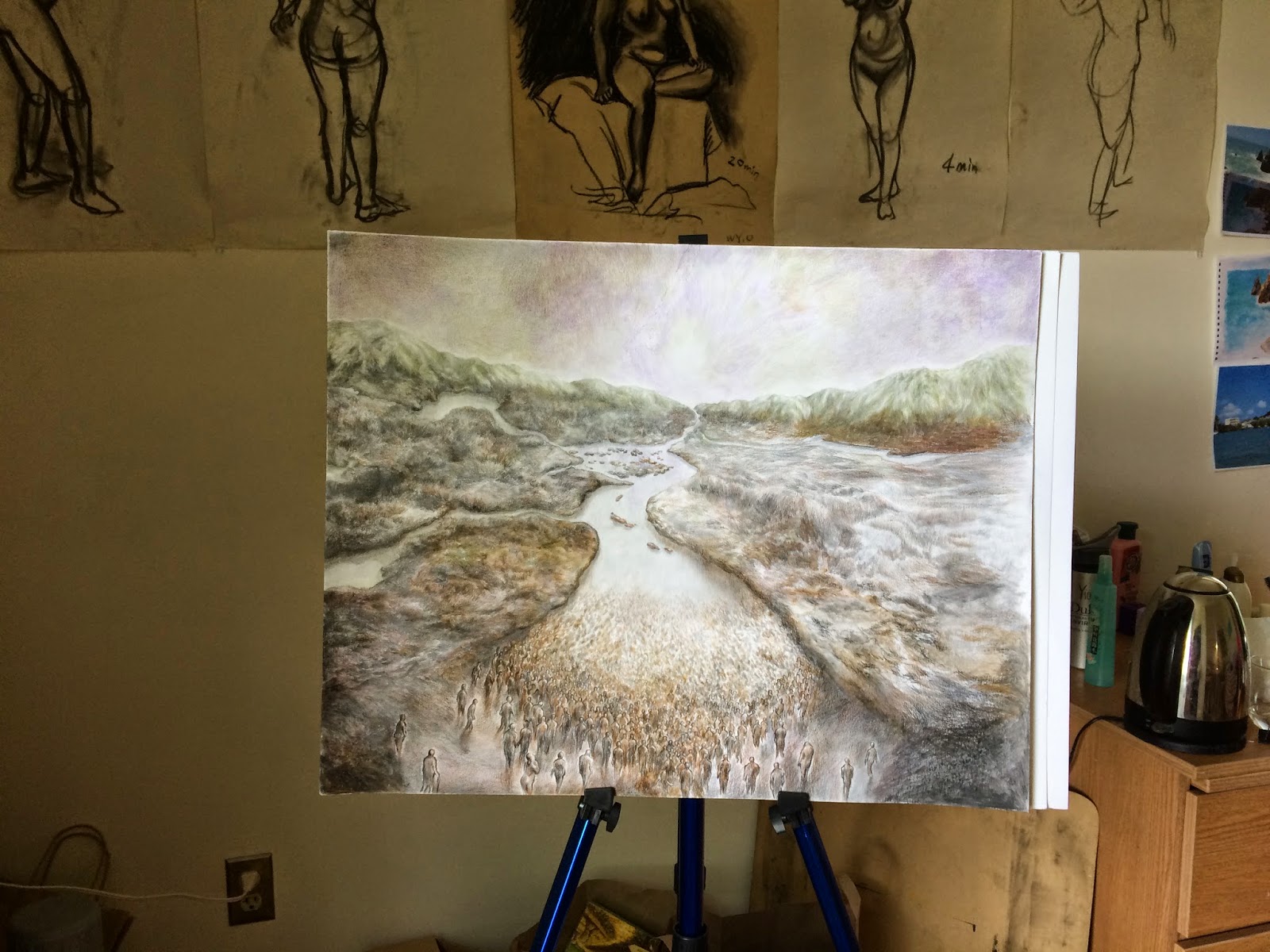 The Homecoming (photo in progress)