I have always loved expression through the visual arts and taking Intermediate Art this semester has given me the opportunity to rekindle my passion towards portraiture. A raw portrait, however, is in my opinion mediocre and characterless to look at. So this semester, I focused on creating portraits that had a twist to them, either through contortion or conjointment. Through studying the structure and proportion of the human face, practicing with shading techniques and creating my own reference photos, I developed a vision for my art that revolved around particular features in floating heads. 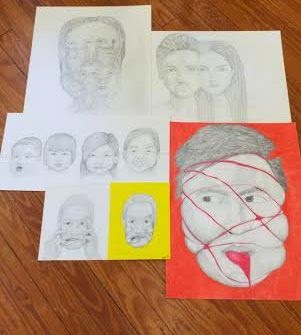 My first piece focused on two conjoined heads that shared half a face. This piece was inspired by a sketch I did where two twins had conjoined heads. For my second piece, I wanted to expand on that and decided to conjoin four different heads while having a central head that encompassed all four. At this point, the people I was referencing to were pictures I had found online. I wanted to have the correct proportions but the people themselves held no content. For my third piece, I asked my Mom to photocopy some old photos of my younger sister. This piece focused on the fact that even though she is growing up, there are certain features in her factual structure that remains the same, like her chipmunk cheeks. The four heads resemble her at different ages and the webs connect the eyes together. Metaphorically, this resembles the myth that the size of one's eyes doesn't change throughout ones life and possibly the saying "life flashed before his/her eyes". My fourth piece displays my friend Sam, pushing in his face on the left side, and the same image on the right but without his hands. The right side hints at bulges in face or forces that are interacting with his face. This was inspired my Gillian Lambert, an artist who focuses on texture on the face. The right side has a yellow background for added attention. My last piece is of my friend Jason, whose face has been wrapped around in gum. I focused this piece on an uncomfortable feeling eg. the feeling of gum being stuck on your face. For this reference photo, I used rubber bands to emulate the strains going across his face. While drawing, I used color pencils to shade in the "gum" and exaggerated the bulges in his face from the rubber bands. I also wanted to continued with the bold background and decided to use a clashing color to make the drawing more perplexing. 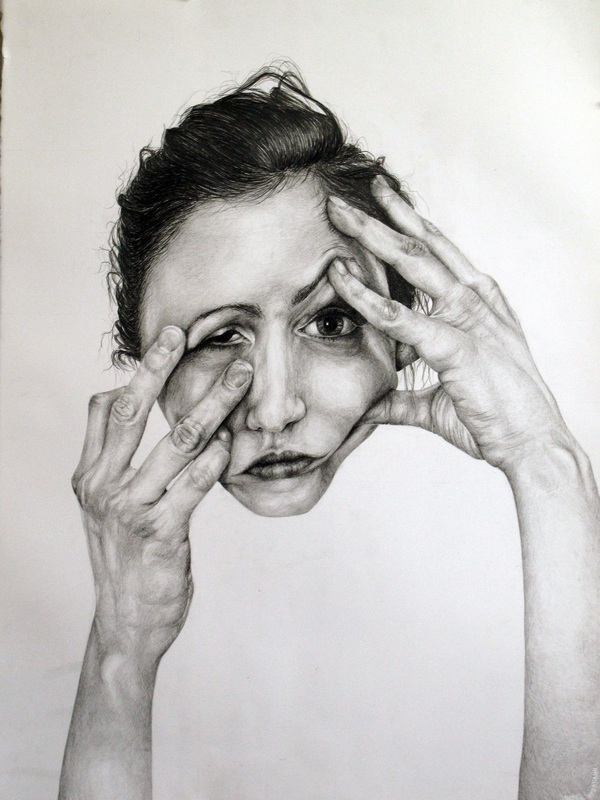 Overall, I feel like my pieces evoke viewers to discover what is obscure in the piece. To me, it is important that I accurately represent facial structure in a realistic way through using models and reference photos while also mixing in a fictional element that makes the piece altogether more curious than just a normal portrait. As an artist, I don't think I have changed that much compared to me in high school. I have however, developed developed better skills in shading and proportion, and creating interesting content within the piece.