Leonardo Da Vinci was known not only as one of the greatest painters of all time, but also as a person of diverse talents who excelled in a wide variety of fields ranging from music to engineering, invention, writing, and more. Born on April 15th, 1452 in Anchiano, Tuscany (now Italy), Da Vinci got his surname from the nearby town called Vinci. Some of his best known works include paintings such as the Mona Lisa, the Vitruvian Man, and the Last Supper, which is the most reproduced religious painting of all time. In addition, he used his artistic talents to further other pursuits like anatomy and invention, producing numerous sketches of architectural designs, inventions, and painstakingly detailed anatomical drawings. Because of his curiosity and imagination, Da Vinci is typically considered the epitome of the Renaissance humanist ideal.


During his time, Da Vinci was commissioned to paint on a variety of surfaces, including canvas, board, wet plaster, and stone drywall. He made his own oil paint by hand using ground pigments and also experimented with gesso and egg tempera later in his career. Da Vinci liked using muted, natural hues associated with earth, like blue, brown, and green. Because the colors are mild with less contrast, Da Vinci’s finished works have a very smooth, cohesive quality to them. He often started his paintings with an underpainting of gray or brown before adding layers of transparent glazes. In addition, Da Vinci was a practitioner of the technique called sfumato (like smoke), one of the four Renaissance canonical painting modes. This technique is used by combining dark glazes and blunt colors to achieve a level of depth, and an example of this can be seen in the Mona Lisa. 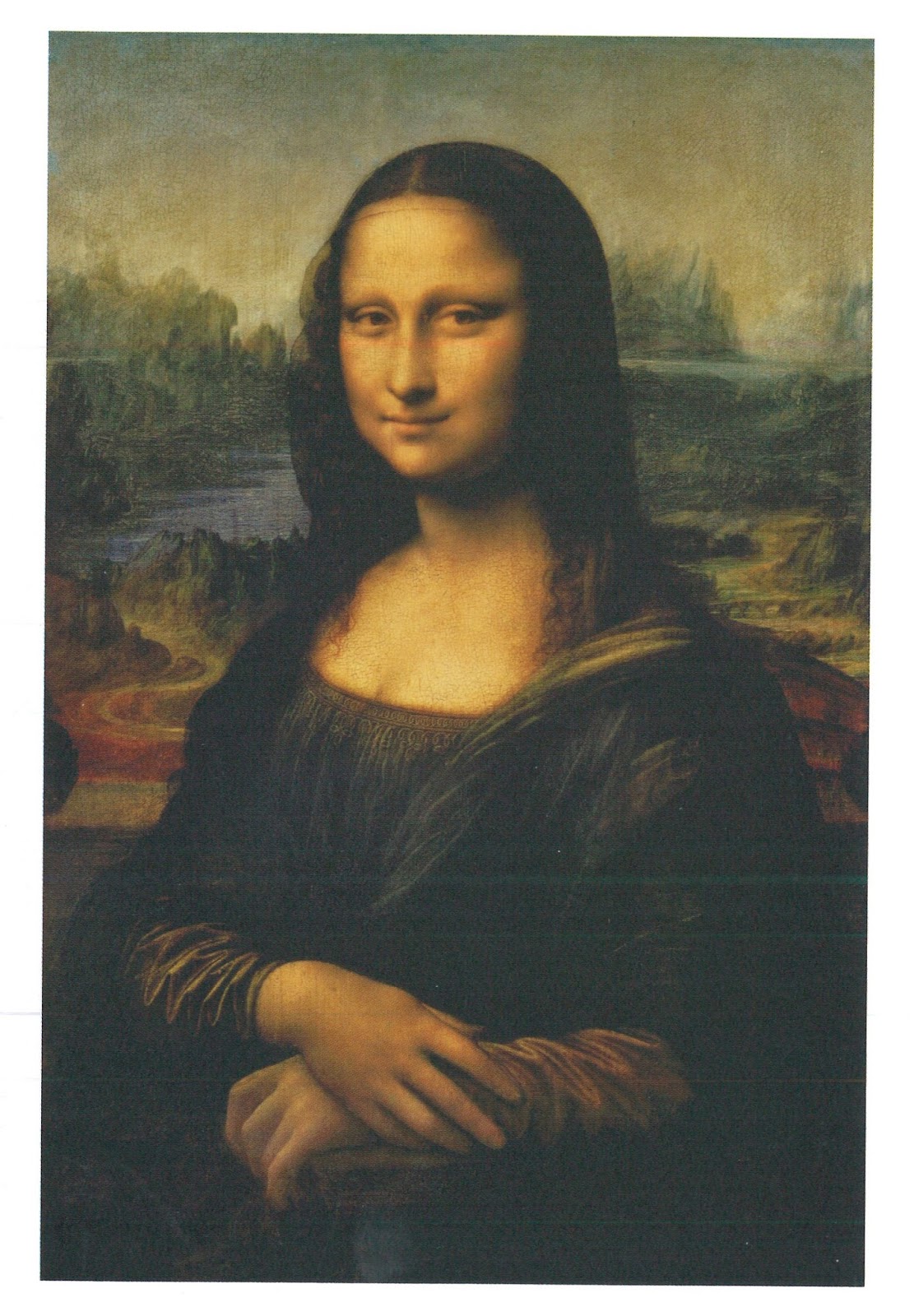 Known around the world for her enigmatic smile, the Mona Lisa was thought to be the portrait of a real woman called Lisa del Giocondo. As mentioned earlier, the colors appear more subdued and natural. Mona Lisa’s face especially shows the use of sfumato, which Da Vinci himself described as "without lines or borders, in the manner of smoke or beyond the focus plane."

Also called “Madonna of the Rocks”, this painting is one of the two versions painted by Da Vinci that are mostly similar in composition.  The four figures are Madonna, an angel, Child Jesus, and the infant John the Baptist. The range of colors used is again relatively small, and the outlines of the figures are somewhat blurred through sfumato. I like how the book presented parts of the painting (e.g. infants) with greater detail, which gave me a chance to observe the painting “up close”, as if I was actually in the Louvre (where this is currently on display). 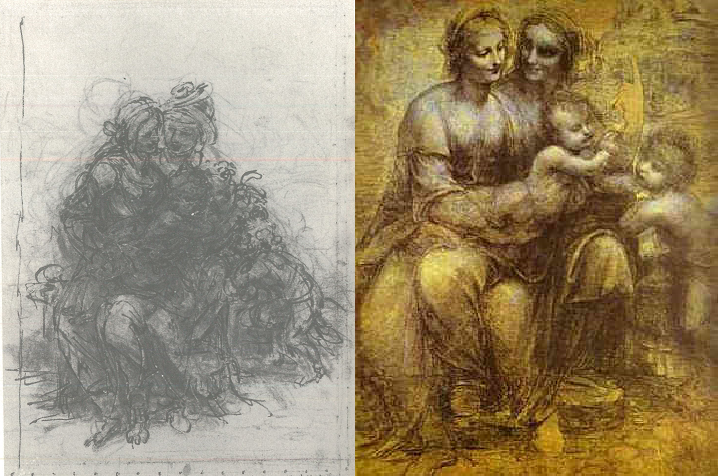 Also called the Burlington House Cartoon, the figures above show the completed cartoon (right) and its study drawing (left). I picked this one in particular because our class has put a lot of emphasis on using study drawings as a tool and these figures serve as great examples. The study drawing is very rough, with loose lines indicating the four figures and their relative positions. Using it as a guide, the nearly life-sized cartoon on the right would probably have been a lot easier to develop. 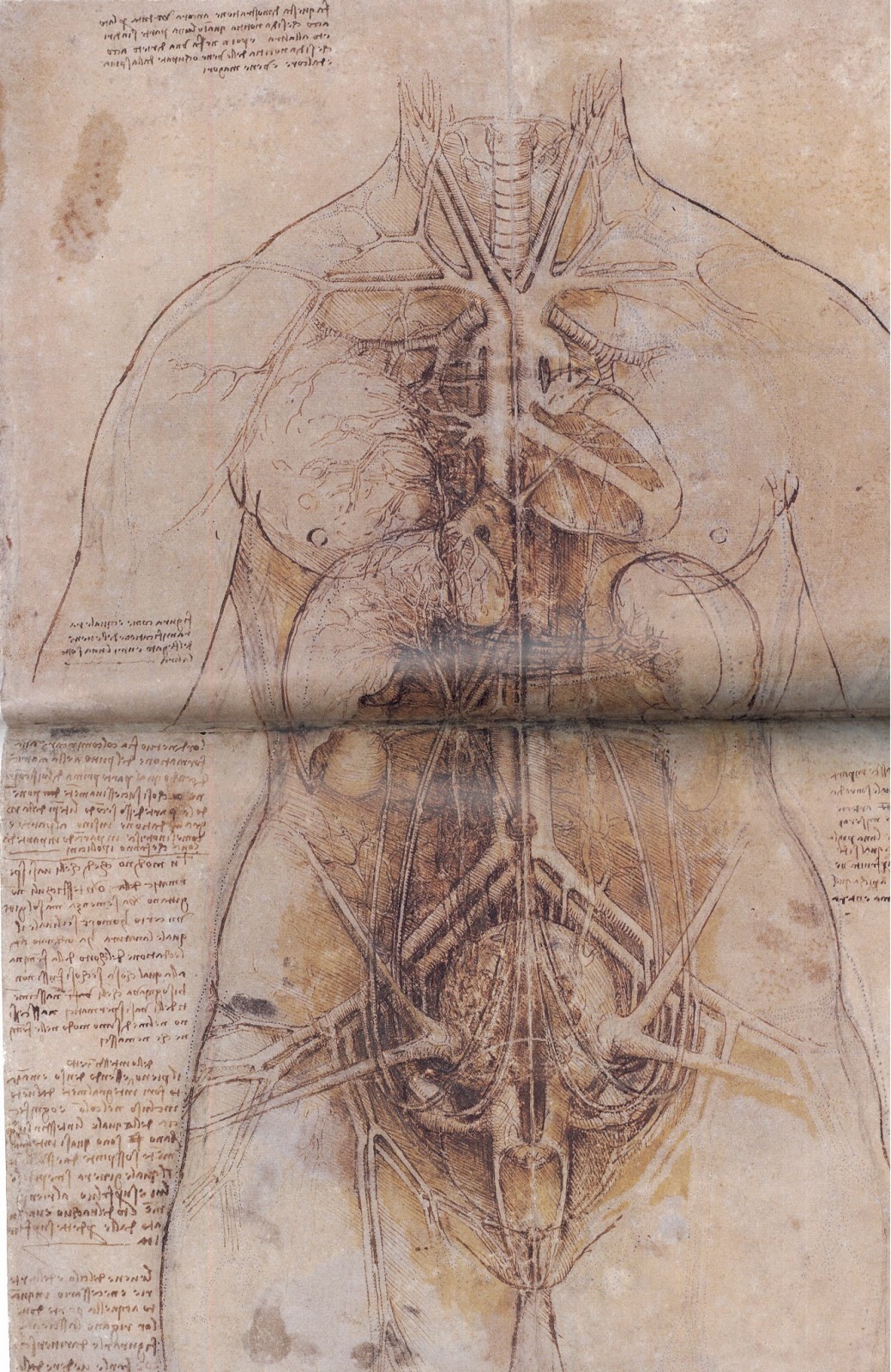 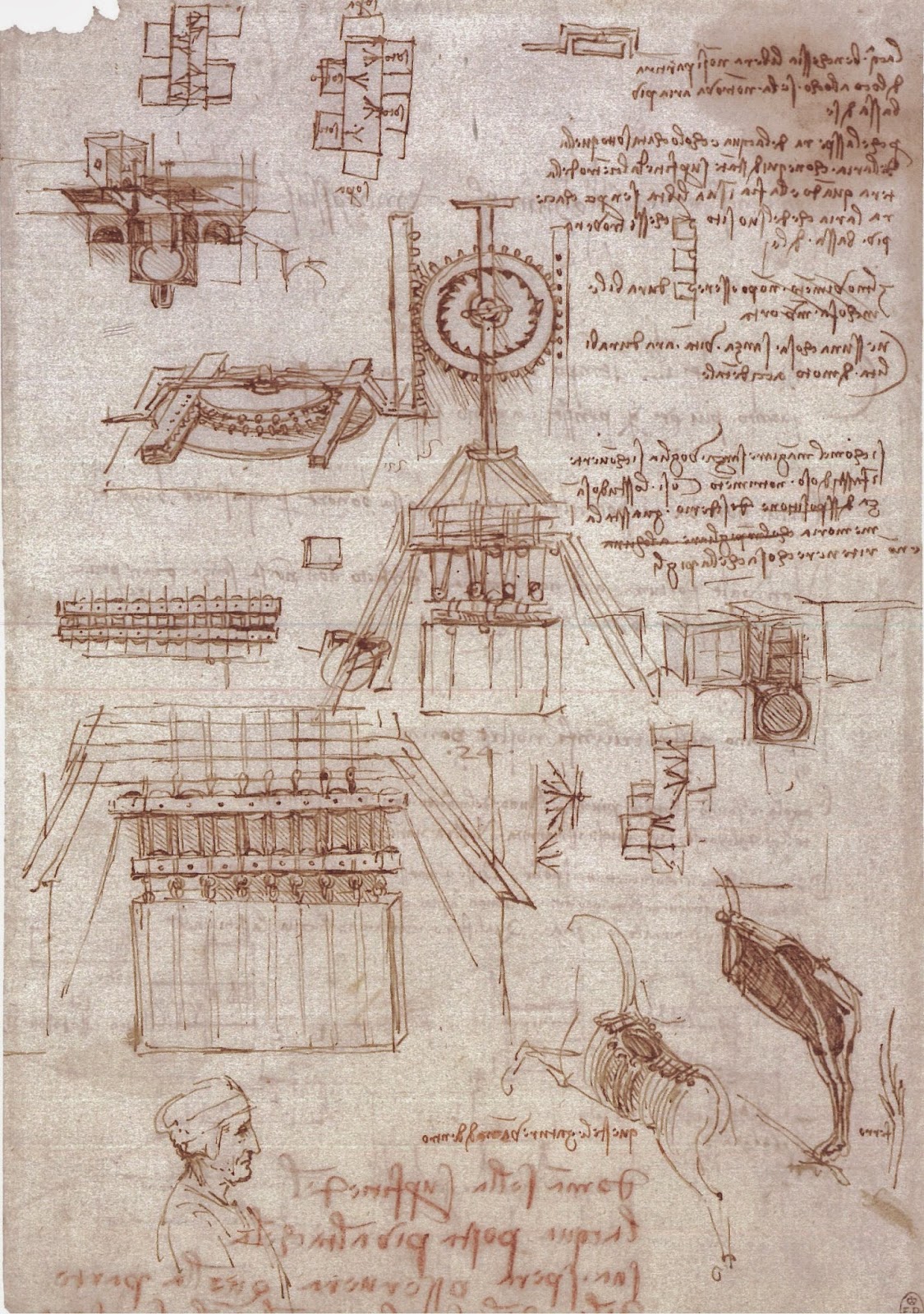 Studies for the casting of the Sforza monument (c. 1493)

The last two figures shown above came from Da Vinci’s work in anatomy and creating inventions. Through animal and human dissections, Da Vinci studied anatomy extensively and made groundbreaking discoveries on many different parts of the body, including the liver, spine, and aortic valve. The amount of effort Da Vinci put into these studies is evident in the level of details present in his drawings, such as the example shown here (top). On the other hand, the figure on the bottom is focused on engineering and mechanical design, with an intricate setup of gears and pulleys from multiple perspectives.

I chose Da Vinci because, like him, I also love learning new things from many different areas, and I think it’s amazing that he was able to accomplish so much in such diverse fields. Through his genius, Leonardo Da Vinci has made a lasting impression on the world. Even centuries after his time, we still regard him with respect and awe for his ability to imagine and create.