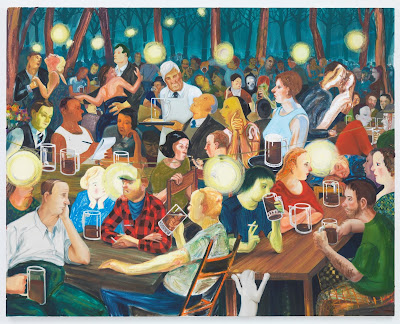 In Nicole Eisman's "Brooklyn Biergarten II" we see so much happening, it's hard to know where to start. The diversity of colors and actions amaze and confuse the viewer. What catches my eye is Eisman's ability to develop and "hue" individuals as a way to highlight their diversity. I don't know if this was her intention, but for me it helps show that each individual is unique and coming from different places with different stories.

What I mean is both the range of colors she uses to form a figure, and the extent to which we can see details of that person. An example of this is the lower left corner: the man with the beer in his lap seems fairly developed and his skin tone true to your average white person's. In contrast, the person behind this figure has a sketchy blue blouse, with a washed out skin tone. Some figures in the painting have greenish or reddish skin tones. It were as if the detain and precision tell us something about the figures themselves, and their personalities.

Most people look bored, with most gazing off with their mouths closed. There is something that this does to the painting: it creates a contrast between the party 'essence' and the collective human emotion. In "American culture" -whatever that may be- we think of parties as loud, full of jokes and laughter, with plenty of drinking. Even if we feel anxious, we cover those anxieties to try to "have a good time" and avoid being a "buzzkill." We want the party mood to be happy. In this scene, I would say the mood for me is not 'happy' but content or even bored, or tired. No one is bursting into laughter, or even smiling strongly. What does this mean?

Eisman has a way of making a scribbly under-developed figure look complete. Look at the couple standing up on the right. They seem barely detailed, and yet there is a strong feeling associated with that couple. Even while least developed, they hold the most passion, arguably.

Another note on technique - the backdrop is a aqua blue color, which seeps into figures increasingly as you go backward. This is an effective way to transition into distance, and make us believe that the loose blue tree figures all the way back are connected to the scene. If there weren't any blue in the people sitting at the back, then it would seem as though these individuals were not connected to their environment.

I love Eisman's work - she can share so much in one scene. What do you like or dislike about her technique?