This summer, I made a visit to the Renwick art gallery in D.C., and was fortunate enough to get a chance to see “No Spectators: The Art of Burning Man”. The exhibit featured versions of art installations from Burning Man, a weeklong cultural movement that takes place annually in Nevada’s Black Rock Desert. Burning Man is an influential phenomenon in contemporary American art, featuring massive art installations, many of which are ritually set on fire at the end of the week. Replicas of some of these installations were not only at the Renwick, but also on various sidewalk locations across D.C. during the time of my visit (1).

This exhibit was filled with some of the most interesting pieces of art I have ever seen, incorporating not only large sculptures and paintings with detailed patterning, but also beautiful light displays and a virtual reality installation. My interest in Burning Man was piqued, and I was curious to find out more about its origins and other pieces of contemporary art from Burning Man 2017.  Here are some interesting aspects of the event that I’ve learned from my research: 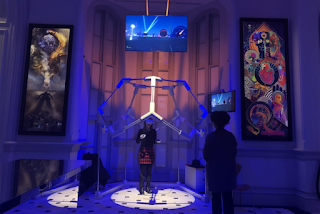 Burning Man invites its attendees to actively engage with the art, which is in stark contrast to the traditional art gallery concept of “look, don’t touch”. However, I believe the Renwick did a wonderful job of exhibiting art pieces that visitors could interact with. I was personally intrigued by the amount of technology incorporated into some of these contemporary art installations. The virtual reality experience created by Android Jones, pictured above, was particularly fascinating because it allowed direct participation and physical interaction with the art. Burning Man brings to light the broad nature of “contemporary art” as a whole, defying any constraints of realism and traditional rules.  Burning Man prides itself on the concept of inclusion, which is why the art installations at this event have such a wide range in terms of medium and size. To see an artistic community come together for a celebration of this scale is truly phenomenal.

1.     “No Spectators: The Art of the Burning Man.” Smithsonian American Art Museum. https://americanart.si.edu/exhibitions/burning-man