Gian Carlo Calza wrote in Japan Style, "Hitting the target, like ingesting tea, is not the purpose of the exercise. The art of tea does, in fact have a goal to change oneself, to achieve an inner awareness of what is necessary to understand or avoid for the sake of one's development." I have been making pictures with a camera for 19 years. Making art with my camera wasn't a choice; it was frenetic and impulsive, compulsive, instinctual, unsatisfying, voracious, tiring and spiritually exhausting. I needed the distractions and escapes, the dive bars and brownies and boyfriends, in order to avoid or release the painful energy of making pictures. I made them to not forget. I made them because I didn't know how to draw yet. 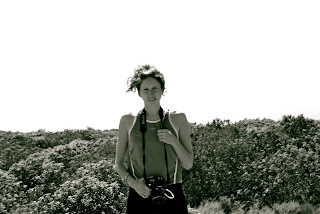 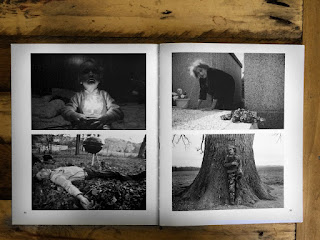 When I made a picture of the deer in my mid-twenties, I didn't want her to die on the road without notice. I wanted to be present with, what James Agee calls, the 'cruel radiance', of her what is... what was. I wanted to reflect on the familial deer that would notice when she didn't make it back to their spot. I wanted to notice she was there or no longer here. Making the picture didn't provide pleasure or alleviate sadness or express joy the way I'd hoped. I kept making pictures, because I had faith that I wouldn't need to make them forever. I had faith that one day I would find rewarding medium - a way of life that would make me happy. I made pictures because I derive meaning, as an empathetic and curious woman, by arranging that which I see within a context of shade, composition, light, texture, arrangement. I made order of the world with a frame. And I stowed the film away on hard drives and archival film boxes and I folded and tore and printed and hid from them.

As Nathanial Dorsky wrote in Devotional Cinema, “For alchemy to take place in a film, the form must include the expression of its own materiality, and this materiality must be in union with its subject matter. If this union is not present, if the film’s literalness is so overwhelming, so illustrative, that it obliterates the medium it is composed of, then one is seduced into a dream state of believe or absorption that, though effective on that level, lacks the necessary ingredients for transmutation.” I sought transmutation, deliverance, interpretation; I wanted to make things that were beyond what was actually there in the sense that I wanted to illustrate the essence without the literal (who, what, when, where, why).

Having worked in professional journalism at Time Magazine in New York, and training as a journalist, I found the literal too dangerous. When we outline the who, what, when, where, why, we run the risk of making an argument that something was. It's not true though. To truly delineate what was, it must be abstracted so that we don't believe we know what was. A visual object must represent the essence of the item at hand without revealing the is. As artists, the responsibility to represent something "truthful" is defeating, oppressive, exhausting. As Christian Rattemeyer writes in his essay Drawing Today as an introduction to Vitamin D2: New Perspectives in Drawing, "The continuity between ourselves and the larger world is expressed through drawing, through marking it, inscribing ourselves into it, through tracing it and making a record and index of some of the elements that surround us; drawing is part of life and life is an occasion to draw." Without the demand that drawing depict "truth", as in photography, I felt liberated to interpret my environment as an essence of what I experienced, not what others expected, demanded, saw, believed. Drawing re-offered the childhood power I once felt to own the world around me as my interpretation. Through drawing I purged a lifetime of practicing or believing that my art had to speak to other people's truths. Counter intuitively, by freeing myself from depicting some kind of "global truth", I created work that was more accessible to the viewer. The specificity of my film and photographs was exclusionary and prevented viewers from imagining or connecting. Rather than activating the mind, my work suppressed imagination. Drawing granted me the right to imagine, thereby imbuing mystery in my work which activated the viewer's mind. As my mentor David Gatten said at our last meeting, on seeing my prints and drawings, "You finally left room for the viewer." 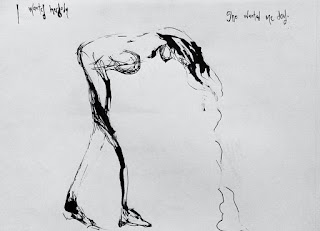 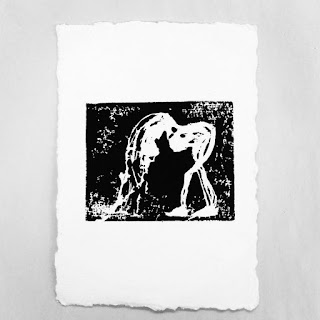 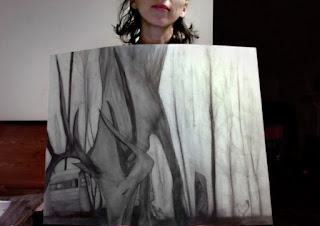 My experience was a triumph of will to transcend years of frustrated art making by appreciating Bill Fick's technical expertise, discipline and positive spirit and by exerting devotion and discipline to this class.

The North Carolina Museum has an M.C. Escher exhibit up right now. Escher drew his father in his death bed. As many of us know, it takes a long time (sometimes hours) to draw something to our satisfaction. To take a picture is short, but to draw engraves the visual image in our psyche, our body, our mind, our spirit in a way that pictures can't because we have to spend more time and then we have to interpret this information through our body, with a pencil. Drawing is slow. Drawing takes time. Drawing asks for endurance and will and faith and peace. Sometimes we don't have that but the medium doesn't abandon us; she waits until we come back.

Pictures have a place in my life still, like this one of my favorite writer David Carr and I. I met him on Christmas Eve three years ago and he died last Spring. I didn't have my phone or camera with me that night, so he took this picture with his phone and sent it to me. "You have to have a picture of this night," he exclaimed, in his raspy, passionate, unforgettable voice. 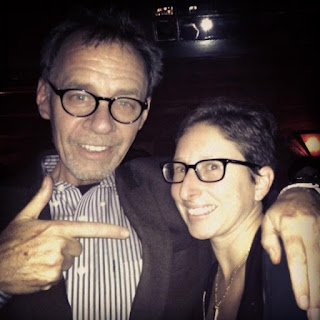 Or the last picture I made of Spikey before we put him down. 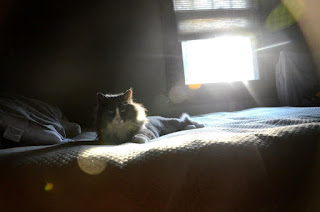 And then there is the picture I made the day I got back from my grandma's funeral and had to catch up on my drawing assignment. Drawing in the aftermath of so much sadness delivered me to notice the technical skills I'd developed this semester in drawing class. "The light in Autumn ropes my spirit. Notice me :: love me :: surrender :: resist. Draw me. Draw the way I'm warm and always leaving. Draw the way she spun sugar into flan and made you eat grapes a las doce para suerte. Draw the way you miss her; draw the way you love her. Draw the way she is here, the way she is gone, the way we are always leaving and going and trying to figure out if they have just come or just left, having never come at all."

Focusing on those skills allowed me to pass through immobilization and to make.

As Rattemeyer notes, "In everyday life we afford drawing a place in the continuum of activities that go almost unnoticed, from telephone scribbles (for a certain generation, perhaps, when landlines prevailed) to the ubiquitous children's drawings so often brought up as the paradigm of accidental meaning, from laundry lists to mapped directions." In these formally 'unnoticed' moments which drawing asks us to notice, I discovered a mindfulness about existence and moving through my life which makes me immeasurably happy. And steady. And confident.

As Shellie Fleming wrote in her last essay titled Never Concluded ...Half Erased, while dying of cancer, “Will’s first lesson to me now howls through my mind (all puns intended) ... ‘learn something well ... then forget it.’ Forget it. FORGET. It would take most of my life before I would begin to self define in a way that could allow me to walk through the world with the kind of peace I would need to deal with life’s clutter and speed. And further, to know one must let go with each step.” In this Drawing class, and through a daily drawing practice, I discovered a peace to deal with life's clutter and speed.

Posted by Beatriz Wallace at 4:03 PM