While searching through Lilly Library, I was immediately struck by the fantastic colors and whimsical quality in the paintings of Georgia O’Keeffe. Georgia attended the Art Institute of Chicago in 1905. She then spent another year at the Art student’s league in New York. There she studied under William chase. She went relatively undiscovered until 1916 when an art collector and photographer named Alfred Stieglitz decided to display her work in his New York gallery. They were eventually married and after he died she permanently moved to New Mexico where much of her inspiration came from. Many of her works display the landscapes, skills, and flowers in a way that focuses on the emotional essence in her efforts to create states of feeling. (O’keeffe)

When Georgia went to Chicago, one of her teachers was Alon Bement . His teaching style was a bit unconventional but Georgia felt very inspired by him. He didn’t want students to just copy nature; he wanted them to use geometric shapes to learn the principles of design. He also heavily stressed the concept of the line. Georgia felt that this method had actually helped maintain her individualism.  Abstraction IX shows how Bement’s methods allowed O’Keeffe to convey a simple impression of beauty just by line emphasis(Souter, 2011).

Although O'keefe originally spent most of her summers in Texas, her love with Alfred convinced her to stay in New York where they could begin their relationship. Her heightened sexuality and ability to create can be seen in the works she produced within the first few months of being with Alfred. She began using bright pastel tones in the soft curved lines in her work which many writers have identified as strong sexual overtones. The picture below is called Music- Pink and Blue I was done in 1919, and beautifully displays these influences(Souter, 2011) 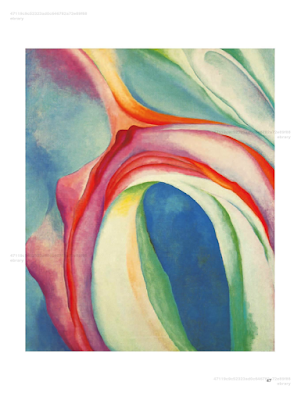 In 1949, O’Keeffe permanently moved to new Mexico and spend most of her days between Ghost Rank and Abiquiú. In her paintings she used a different brush for each color, which added to the preserved intensity of the shades. Her work during this time was a cross between abstraction, realism, and surrealism. She claimed that “nothing is less real than realism; details are confusing.” She would often draw a series of a subject, searching for the perfect expression of feelings. She had a passion for the landscape of New Mexico and the quiet pleasure she found in the great landscapes really show in My Backyard, 1937(Souter, 2011) 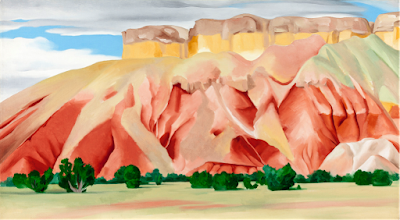