The book that caught my eye in the Lilly stacks is called “Women Making Art: History, Subjectivity, Aesthetics” by Marsha Meskimmon. It immediately caught my attention, as I am a young woman and a proponent of women’s involvement in, success within and advancement of every study and field, including art. The book is full of the stories of incredibly influential women who documented the current events of their time through different modalities of art. The artist I chose to focus on is Faith Ringgold, an artist who strove to weave the heated sociopolitical, gender-related and racial tensions of her lifetime into her work.

Meskimmon writes, “In the case of women doubly inscribed by sexual and racial difference, the problem of objectification and the inability to attain an empowered subject-position is all the more pressing. Thus, the process of positioning embodied black female subjects against the grain of historical and theoretical marginalization is an act of corporeal cartography which reconceives western knowledge systems as it rewrites monolithic historical formations” (Meskimmon 36).

Throughout her career, Ringgold has been an instrumental propagator of change surrounding her society’s notions that black women didn’t possess the capability to be creative, and that they could only ever be objectified in media and in art. This has had a lot to do with institutionalized beliefs and rhetoric that art of the European and American descent was superior to the art born from the African diaspora. Ringgold, and other influential black women artists of her time, were fighting a multi-faceted battle against discrimination regarding sexes, races, and the possession of creative agency.

The chapter of Meskimmon's book in which Ringgold is included is called “Corporeal cartography: women artists of the Anglophone African diaspora”. Meskimmon explains that there are different schools of thought regarding the involvement and influence of black women artists such as Ringgold, as well as varying interpretations of their art and its impact. The crux of “corporeal cartography” is to embody the junction between bodies depicted in art, and where those depicted bodies have been- geographically and socio-politically. The function of "corporeal cartography" is explained to be the re-telling and sometimes the re-writing of history through art, with the goal of more accurately and more justly depicting the importance of, integrity of and societal contributions made by historically marginalized communities (Meskimmon 37).

With this critical background in mind, I was able to reach a deeper level of understanding of Ringgold’s art. She is recognized for her notably striking social commentary conveyed predominantly through quilts. She first began her artistic endeavors with the creation of tools of civil rights activism, such as posters and masks, and then somewhat ironically went on to become an acclaimed author and illustrator of children’s books. In addition to quilting, she often employed acrylic and canvas as the interface for her work, sometimes even utilizing both paint and fabric together ("Faith Ringgold").

Visually, I was immediately struck by the vibrancy of her color choices, and the force of life that seems to be coursing through every work and bringing them alive. Themes that she observed throughout her upbringing in Harlem, New York City in the 1930’s seem to radiate through her work in the form of action-packed scenes and lots of engaging visual interest. Some of her work depicts the joys of life and the human experience, and some of it depicts serenity and the value of community. Perhaps her most striking works employ unnerving visual stimuli, such as blood, smoke, and scrawled bodies, which work together to declare a marked social commentary and elicit an off-putting effect. 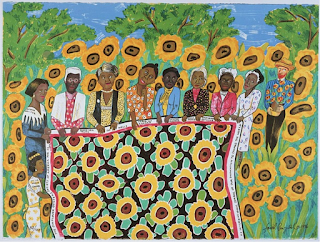 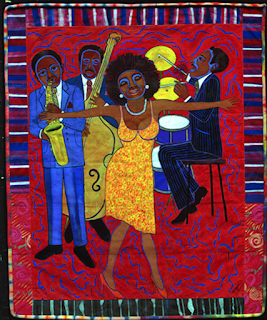 Faith Ringggold (b.1930). Jazz Stories:
Mama Can Sing and Papa Can Blow #1 & Somebody Stole My Broken Heart,
2004, acrylic on canvas with pieced border. 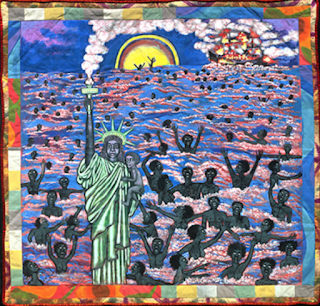 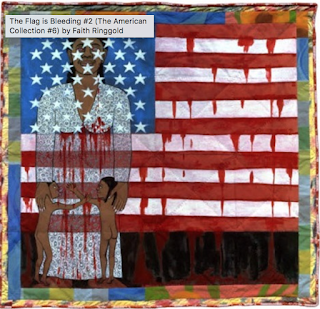 About the Author Donna Tennant Donna Tennant is a Houston-based art historian who has been writing about art and artists for many years. “The Magnificent Faith Ringgold: A Legendary Artist's Survey Exhibition at Houston Museum of African American Culture.” Arts & Culture Texas, 17 Aug. 2017, artsandculturetx.com/the-magnificent-faith-ringgold-a-legendary-artists-survey-exhibition-at-houston-museum-of-african-american-culture/.


"The community [in Harlem] let me develop...I painted the only way I knew how to paint...I tried to put the images down the way I related to the community...I was being taught...to see."

Jacob Lawrence was an American painter who was born on September 7, 1917 in Atlantic City, New Jersey. Lawrence was one of the most widely acclaimed African-American artist in the 20th century. He attended the American Artists School in New York, where he developed his own unique style of modernism and began creating narrative series for all his paintings. He is best known for his Migration of the Negro that was displayed at Edith Halphert’s gallery in 1942. Lawrence was then acknowledged for being the first African-American to join the gallery. As an artist, Lawrence relied heavily on historical research that included texts, memoirs, newspapers, and images that were prominent during the Harlem Renaissance. 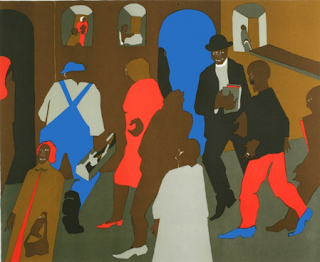 In 1971, Lawrence was offered a job teaching art at the University of Washington where he concentrated much of his work on “topic of Builders”.
Jacob Lawrence combined Social Realism, abstraction, pared-down composition, and bold colors to express the experiences of African Americans.  In addition, he translated human struggle into his paintings. For example, Lawrence expressed political struggles like Jim Crow into his paintings. Lawrence had a powerful styles that expressed the pathos of his neighborhood and all of its occupants. 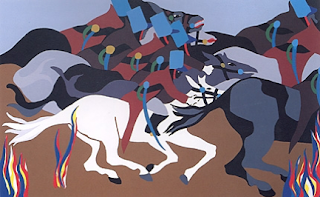 
During World War II, Lawrence was assigned as a combat artist. In 1946, he received a Guggenheim Foundation grant to paint his War series. Then in 1947, Fortune Magazine asked him to create ten paintings that portrayed the postwar conditions in the south. He used water-based paint on hardboard panels with bright and bold colors. In the 1950s, his perspective became more complex because he art became more symbolic. 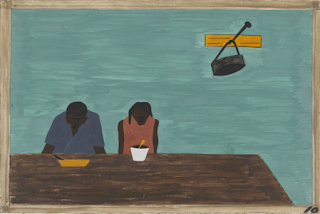 
During and after the World War, Lawrence continued to attract a vast audience through personal connection. For example, the painting displayed earlier, They were very poor, replicated the hardships that many African Americans experienced. He was initially influenced by Mexican muralists and early artists like Goya. He comprised about 60 “tempera” works with visual motifs to depict everyday life around him. He achieved immediate success through his own visual representation of his culture.
Lawrence also painted frescoes that are exhibited on the Times Square subway and murals for the University of Washington.

I chose to study Jacob Lawrence because of his use of abstraction to depict a story. His paintings develop a narrative that many of his viewers could relate too. With bright colors and bold subjects, he creates a universal appeal. I loved that his work illustrated the everyday life of many African Americans and their political struggles in the south. He did not just focus on human aspirations but on migration, war, and mental illness. Lawrence took time to study the history of African Americans and connected it to contemporary experiences around him.