One of the greatest draughtsmen over centuries, besides Leonardo and Michelangelo, would be Peter Paul Rubens. Born in Siegen, Westphalia, 28th of June 1577, he was a prolific seventeenth-century Flemish Baroque painter, and a proponent of an extravagant Baroque style that emphasized movement, color, and sensuality. He is well-known for his Counter-Reformation, alter-pieces, portraits, landscapes and history paintings of mythological and allegorical subjects. People are more familiar with his polished paintings, such as The Rape of the Daughters of Leucippus, Massacre of the Innocents, and The Four Philosophers, etc. Rubens' most highly finished drawings were his portraits, as of course these were meant for his sitters as finished works, often commissioned by the sitter or his or her family.

Relating to our Drawing class, it is interesting to note that great draughtsmen like Rubens also followed the same drawing process as what we are learning in class—sketch, study drawing, and then the finished piece. It is important to abide the order of the process, because a sketch is to remind the artist of an idea he/she had, or to suggest to him/her a way of composing the work that he/she suddenly thought of. With the initial idea jotted down on sketchbook, the artist could follow up with his/her work.

Rubens was master of the sketches he made to remind him of ideas of paintings. One of the sketches attracted me was the sketch of a couple that later Rubens painted a large composition "Le Jardin d'Amour" shortly before he died, in 1640. I was amazed by it; as not only did I simply find it beautiful, I found it impressive that he used the technique of sketching the work in relatively high detail but leave the face of the girl in profile as nothing but an outlined space. The perfect composition of negative and positive space was so innovative (at that time period) as well as pleasing. 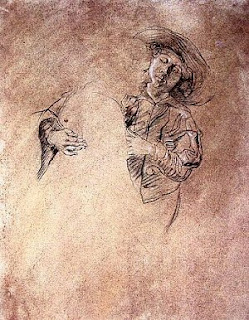 As for his portraits, Rubens used a red chalk known as sanguine (from the French word for blood) and hi-lit his tinted papers with white chalk, sometimes even adding one or two touches of color with pigment; the same pigment he would use for painting but just treated in a different way. Sometimes, instead of the red chalk Rubens would use charcoal, so that the portrait would be drawn in black lines--still probably hi-lit with white chalk. The blend of gray and sanguine brought the portrait to live. 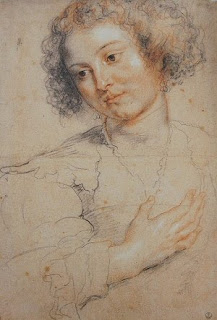 (Young Woman Looking Down, Study for the Head of Saint Apollonia) 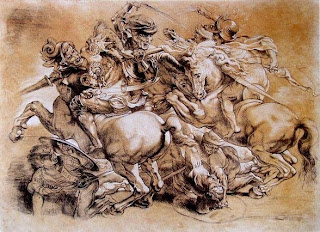 (Battle of Anghiari, Rubens’ Copy of the Lost Leonardo Drawing)

Posted by Ingrid Zhuang at 10:58 AM No comments:

Two years ago, I was introduced to the work of Jim Dine on an art class field trip to galleries in Chelsea. As I walked into the Pace-Wildenstein, Dine’s exhibit: Hot Dream (52 Books) overtook my senses. I fell in love with Dine’s imagination, vivid colors, and expressive style.

Jim Dine was born on June 16, 1935 in Cincinnati, Ohio. He graduated with a BFA degree from Ohio University in June 1957. Dine lived and worked in New York and London, working on a series of themes and projects. He is often considered a pop artist and was involved with the first Happenings. However Dine argues, “I’m not a Pop artist. I’m not part of the movement because I’m too subjective. Pop is concerned with exteriors. I’m concerned with interiors. When I use objects, I see them as a vocabulary of feelings…I think it’s important to be autobiographical. What I try to do in my work is explore myself in physical terms—to explain something in terms of my own sensibilities” (Livingstone 14). Dine often used “common” objects as a medium to explore in his art. For example, hardware tools, hearts, skulls, and bathrobes are prominent in his work. These seemingly commonplace objects stand in as icons for Dine. He was greatly influenced by his grandfather’s hardware store, where he used to work in his adolescence. The hearts are thought to represent his wife, Nancy, and other figures are thought to represent himself: “I used them (tools) because they felt right. They felt like relatives of mine, as though their last name was Dine” (Glenn 15). What I appreciate about Dine is his ability to further explore and stretch the idea and subject of tools. He uses certain objects and keeps reusing them, extending the limits so that his expression comes out. I also admire his variability on simplicity and complexity. Some of his works are just a tool, and in others you can see the previous marks he made, the layers he built up, etc. He uses many different mediums including charcoal, collage, etching, paint, and sculpture.

Here are some works that I think exemplify his style:

Self in the Ocean

A Robe Against the Desert Sky

Posted by Nikki Whang at 7:57 PM No comments:

Lambert Doomer was a Dutch drawer and painter from Amsterdam, who lived from 1624-1700 during the Baroque era and the Golden Age of Dutch Art. The Baroque period is characterized by ornate and decorative works, although this description does not seem to fit Doomer's simple yet precise drawings. The Golden Age of Dutch Art occurred during the 17th century, when the Dutch demanded paintings and other pieces of art. There was a great deal of competition among artists, and people in the Netherlands bought and sold art and hung it in their homes.

Doomer's drawings are mainly topographical landscapes and document his travels with fellow artist Willem Schellinks through the Netherlands, along the Rhine, throughout France, and to Bingen, Germany. He worked for his father, who was a cabinet and frame maker. Doomer was a draftsman by trade, and he was taught and influenced by Rembrandt, who was a customer of Doomer's father. He copied many of Rembrandt's drawings while learning from him.

Doomer's "Bridge Across the Loire at Amboise" uses pen and brown wash, and brown and grey wash with brush. "Noah's Ark on Mount Ararat, a Camel Train outside a City in the Foreground" uses pen and brown ink, and brown, yellow, and gray washes. 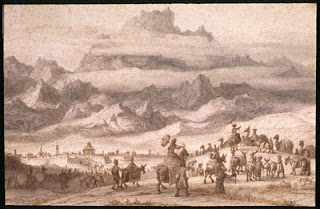 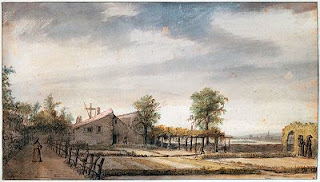 Posted by Elizabeth Holmberg at 10:50 AM No comments: