I decided to choose Botero because I have always felt drawn in by his figurative drawings and paintings. Born in 1932 in Colombia, many of his works resemble that of earlier cubist artists such as Fernand Leger. What really strikes you with this artists is that in each one of his works, may they be politicized portraits of controversial figures, to still life of a basket of fruits, it always seems as though everything takes on a "fatter" dimension. His personages are somewhat chunky which almost gives his works a humorous undertone. 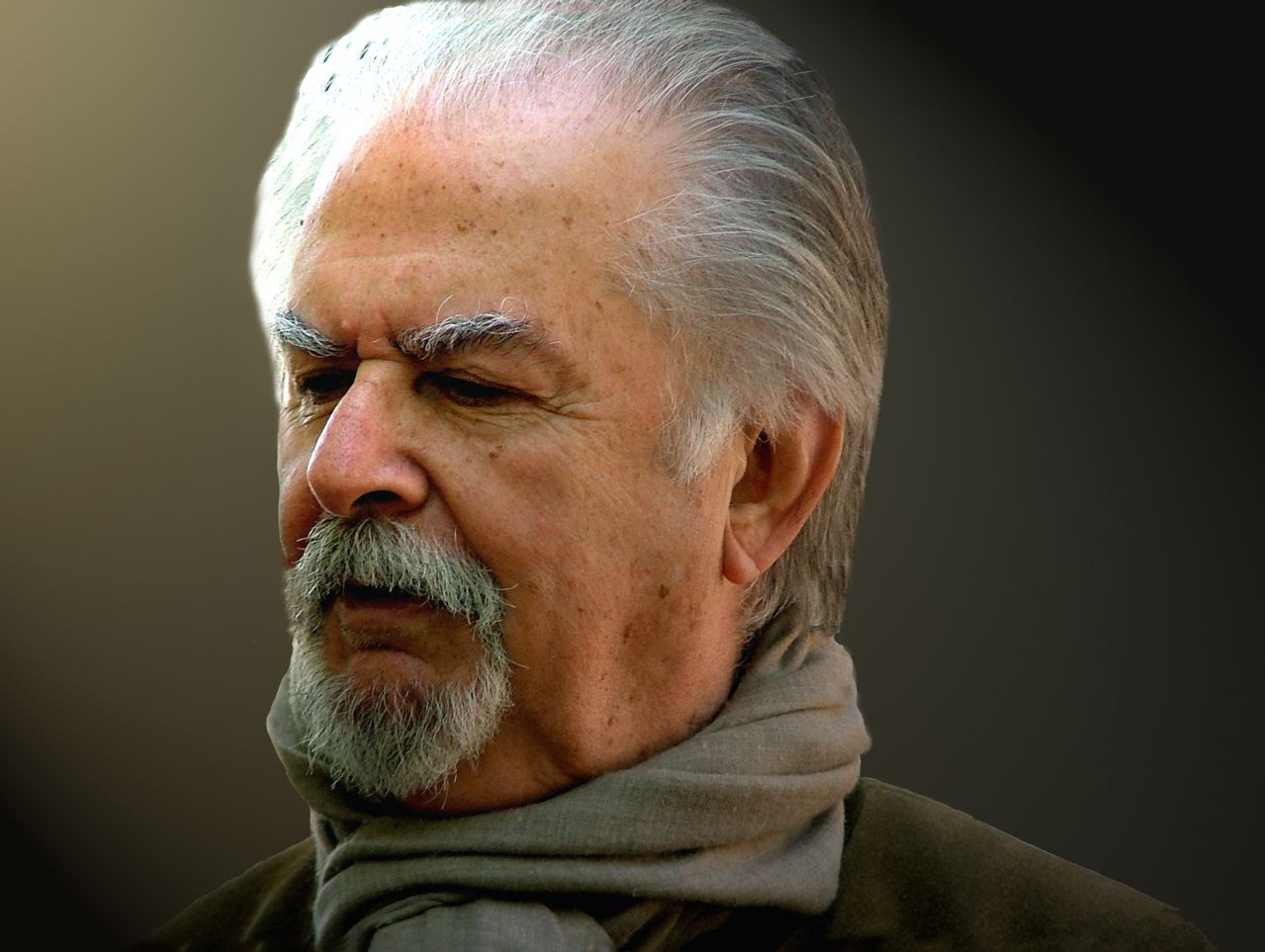 Born in Medelin, Botero was influenced in many of his pieces by the baroque architecture and style of the colonial buildings and churches and the vibrant spirit of his hometown. In 1952, the artist left his native land for Europe, where he lived in Barcelona, Madrid, Paris and Florence, where their classical forms of art inspired him. Botero depicts still life and landscapes. However, his focus remains geared towards portraits. As a multitalented artist, he also sculpts, and all his works share the same proportionally exaggerated “fatness”. These rounded forms are often painted over with smooth brush strokes. He is greatly celebrated across the world and his unique style is sometimes described as “Boterismo”.

Above is Botero's 1993 drawing entitled "Still life with a guitar" (found in Marc Fumaroli's book, Botero Drawings). Although this is a more recent work, I have decided to include it because it is very characteristic of all the objects represented by Botero, even in his paintings. In this particular example, the fruits seem substantially larger than in real life and somewhat out of proportion. The same effect is applied to the fork and knife which seem bulky. Even the guitar seems out of proportions and exaggerated at some parts. This creates a sense of abundance, but somehow manages to maintain a certain harmony. Although this may seem to be lacking finesse and somewhat 'childish', it creates a feeling of comfort and ease. Even the buildings in the background have a cartoonish and simplified look. This however does not detract the value of the work, which accentuates curves on humans and still life.

The feeling of excess or obesity, childlike features and innocence are all characteristics of his works. Below are a few examples that illustrate this

The Poodle (below). In this portrait the dog takes on a quasi human dimension. Its face has similar features to that of his portraits of humans and the hair resembles that of an 18th century european aristocrat.

In some of his paintings, the children even seem to take on the form of "small adults" as their faces seem mature and their bodies more developed. A family, 1996 (below).

Two portraits of Ballerinas (below). Botero somehow manages to depict ballerinas - usually portrayed as limber and delicate - as somewhat chunky and overwhelming. They do not however appear to be clumsy and still maintain finesse and a serious expression. 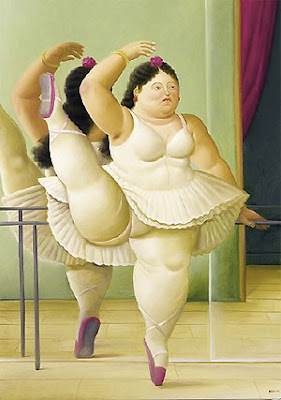 Having learned fresco techniques of earlier old masters in Florence, Botero was inspired by their recurrent religious themes. However, he has managed to incorporate a certain nuance and twits to his religious portraits. The Bishop in the Woods, below, is a good example of Botero's many paintings of religious figures. They are inspired from his upbringing as a Catholic and from his native culture.

Botero is also famous for having borrowed from some of western art's most iconographic works. He recreates and revamps famous paintings such as the Mona Lisa, amongst others. These exemplify to what extent Botero was influenced by the old masters and how he has managed to add his own flair to their creations. 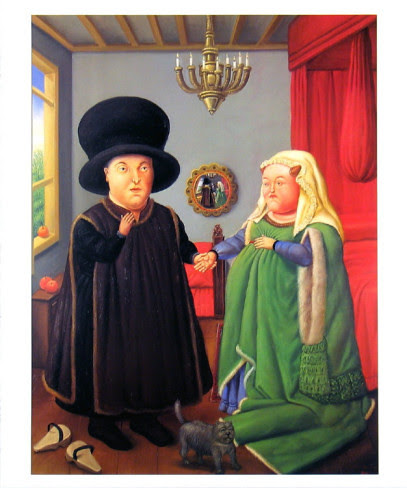 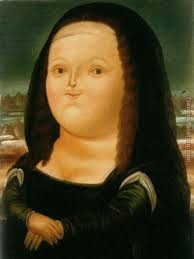 Many of Botero's paintings show his personages in active and dynamic scenes. They are playing instruments, eating, riding horses or doing other day to day live activities. He brings to life the nocturnal life of the cities and celebrates their vibrancy. 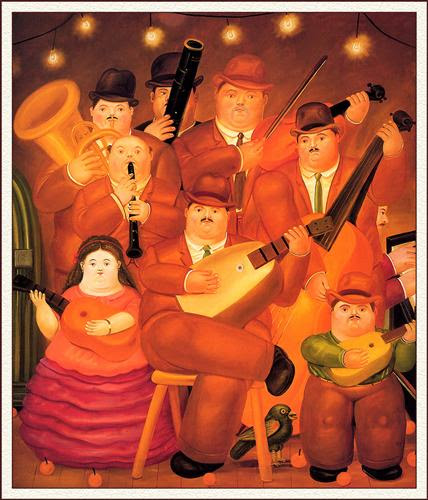 Moreover, Botero is also a politically engaged artist. More recently, he received a lot of buzz for his series of paintings depicting scenes of violence and the atrocities occurring in Abu Ghraib. He paints brutal images of torture wrongfully inflicted onto prisoners. This is his way of speaking out against the injustices that are taking place. Earlier on, he painted a series of portraits of Colombian drug cartel leader Pablo Escobar. They ranged from portraits of him escaping assassination to paintings of him being paraded in his coffin. Having suffered through the painful toll of the drug cartels in his country, Botero remains strongly outspoken to this day against the Cartels and the drugs which have for so long plagued Colombia of violence.

Above, Abu Ghraib 57, 2005. Below is a painting of the infamous drug lord Pablo Escobar being shot on the rooftops of a Colombian town. 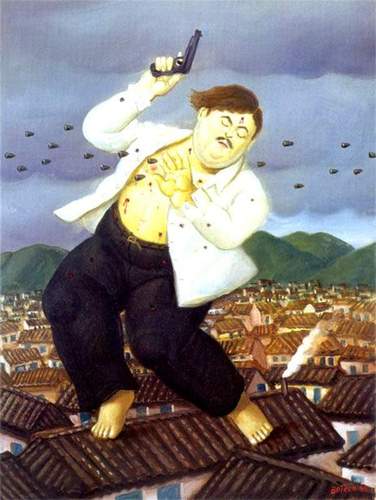 Artists whose work reminds me of that of Botero

Below, Le Mecanicien of Fernand Leger (1881-1955). This painting resonates with portraits of Botero's personages. The round shapes are accentuated and the body parts are simplified to some extent

Some of the portraits of Tamara de Lempicka (1898-1980) share the same element of mystery as Botero's portraits. 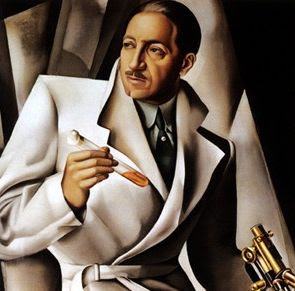